Happy birthday to me! And my mom and my sis-in-law. As a gift to us all, I made a bunch of indulgent little gifts. 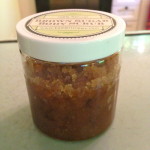 First and BEST, I made some brown sugar body scrub to mimic my favorite body polish by Fresh that costs $65 for a 14 oz jar! (GULP!) It’s heavenly. It exfoliates gently, smells…well…fresh, and leaves my skin feeling like silk. But it’s ridiculously overpriced and not something I can splurge on very often. I perfected a recipe that could pass any side-by-side comparison and have been using it during every bath time since, making up for all the times I didn’t because I’m cheap. Now I’m a smooth, soft, shiny, silky happy cheap lady!

Second, I packaged my favorite fire starters in little sack with wicks sticking out of them. Now, personally, I just burn the firestarter on its own, but they’re not very attractive. Hopefully the paper sack will burn enough to ignite the ugly starter. If not, lighting the fire starter itself is guaranteed to work. They are crazy efficient and pennies compared to the expensive logs sold in stores. 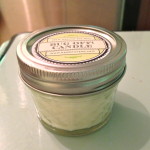 Third, I made bug repellent citronella candles. I love burning candles, but dayummmm they’re flipping expensive! To top it off, so much wax ends up leftover and wasted. After doing some research, it turns out most if not all are made with paraffin wax and synthetic citronella, not the essential oil with true protective qualities. Huh. How about that?

I chose to make hand poured soy wax (natural and, hey, soy beans are almost entirely farmed in the U.S.A.!) and citronella essential oil (the real deal). This was the trickiest project as it turns out candle-making is practically science. Once I got it figured out, I made my gifts. I hope theirs work as much as mine does. I started out small to save on expenses for the inevitable mistakes. Now that I know my little one is working, I’m gonna make larger ones in recycled pails, jars and cans which are better for the open air patio. 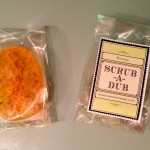 I also threw in some homemade soap with real bits of lemon zest and drops of lemon essential oil. Mmmm, fresh & clean smelling and so great for the kitchen. Honestly, I’m not sure I’ll keep making my own soap, though. So many people make amazing soaps and soap isn’t that freakishly overpriced like everything else. It’ll depend if I find a recipe or two that I love so much that I have to have more. And I need to either get real molds or a proper soap slicer. I used recycled yogurt cups which are the right size and shape, but I had to cut them with a butcher knife which made one break and the others look sloppy with cracks in them. Drat.

Finally, my second favorite but a close race for first, I made some bath bombs a/k/a bath fizzies. Lush makes the best bombs in my opinion (Phoenix Rising is heaven on earth to me), but there is no Lush store near me. Also, as I near the end of this post, I see the main trend is that I’m cheap. Let’s say frugal. Bombs are a little extravagance I’d treat myself to on a rare occasion because at the average cost $7 a plop that adds up!  They’re super easy and cheap to make. So much so, it’s like the body scrub…how have I not been doing this for years? 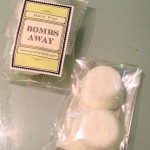 Granted, I’ve not mastered the art to the level of imitating the aforementioned Phoenix Rising in both appearance and function, but my first batch (lavender and coconut oil) was soothing and made for a lovely bath. Also, because it’s been so humid at the cabin (92% humidity? And it’s not raining? The air is THICK!), the moisture was drawn into my bombs as they dried and “activated” the fizz. Not ideal.Made them a little messy, too. The fizz is really for fun, though. It’s the Epsom salt, coconut and lavender oils that made for the soothing night time dip in the tub. And mine still did fizz a bit. Next batch I’ll make when the humidity breaks or will let them set in a sealed tub with some rice to help draw moisture away. 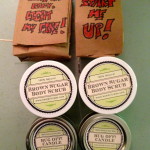 I had a few more in the works –bath salts, refreshing spritzes, bug spray– but my package was late enough as is, so look out ladies! Christmas is just around the corner.

I’ll provide instructions for each over the next few days or weeks. Meanwhile, you can read about them online and stock up your supplies. I had no idea essential oils were super cheap and available in local health stores and Amazon, of course. I’d have been doing this ages ago!

Other resources:
Brambleberry
Bulk Apothecary
My Own Labels