I’ve been studying the Civil War and Reconstruction at Columbia University online taught by Pulitzer Prize-winning author and historian, Professor Eric Foner. It’s been enlightening and has helped satiate my hunger for knowledge of early American history, as brutal, ugly and discomfiting as it is.

Reconstruction, in particular, is all very depressing. But there is also some comfort to be gained, especially during this tumultuous and violent-#MAGA-racist-Trump-agenda, Charlottesville-era we’re living in. The history of the US has been consistently cyclical. With each advancement, there is an immediate backlash and reversal of the progress.

Interested in meeting some like-minded history buffs so I can really talk about this stuff, I joined the Civil War Round Table of New York. Their dinner meetings are held once a month at a gorgeous mansion on 51st Street in Rockefeller Center that is now the Women’s National Republican Club. Their placard made me pause when I saw it upon entering. The building, event link and Google address promoted it as 3 West Club, a special event space. Methinks their rentals wouldn’t be as fetching for New Yorkers with the R word in there.

Each Civil War Round Table meeting features a guest speaker and discussion topic. My first meeting was in September and the first of the new “season” with guest Ed Bearss on the topic “Ask Ed Anything”. Intriguing, but so different from all the other speakers I was seeing on the site who were scheduled to talk about specific topics such as “The Common Man in the Civil War” and “The Court Martial of Fitz-John Porter”.

Mr. Bearss is 95 yrs old at the date of these photos and a delightful, knowledgable historian. He was introduced by a very colorful character whose name escapes me but who clearly participates in enactments as evidenced by his long wavy locks and thick beard. Mr. Bearss spoke without notes, answering questions and eliciting laughs.

The best part was Mr. Bearss’ going off on tangents to tell personal anecdotes.

When asked how he felt about certain movies and their depiction of events, he mentioned going to see “The Horse Soldiers” in 1959. “I was courting my wife and took her to see it. Had I not been courting her, I would’ve walked out. You can play with history; but you can’t play with it too much.” Okay, I’ll mark this movie on my “Don’t Bother” list. 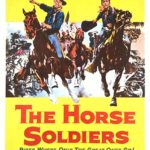 While talking about his military service he mentioned a very tough drill instructor who, if you were caught chewing gum, would make you stick it up your butt. “One man was not very smart and got caught twice.”

My favorite was Mr. Bearss declaring, “I once gave an anti-Chamberlain speech in Maine.” The audience gasped and ooohhhed which was followed by knowing laughter. “Chamberlain” is the revered (to Mainers, at least) Joshua Chamberlain, decorated Union General who served one term as Governor of Maine. I laughed hard, too. Not at the joke (I actually had to look  Chamberlain up to see what I was missing), but at how this group knew a super specific punchline to a super specific anecdote about a random General in the Civil War. Nerds! My people! I have found you!

After he spoke, he stayed to greet people. It was an honor to have met him and I’m grateful he has shared so much of his love of country with so many generations. I haven’t been back to the Round Table, unfortunately. They changed their meeting night to Monday which is when I’m running things at QED. If the stars align and I’m off on a night they meet, I’ll definitely go back even if it’s held at the Women’s National R$@%! Club. ? 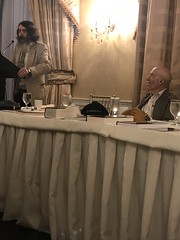