I’ve tuned in to two episodes of “Here’s the Thing” hosted by Alec Baldwin on NPR and find it immensely listenable. I actually ran a 10K (6.2 miles) yesterday listening to the interview with Lena Dunam. Listening to two people chat thoughtfully might not seem like a good running companion, but I was completely engaged and not aware of the intentional beating I was giving my body.

I was excited to share this new discovery of mine (It’s been around for awhile. I don’t know where I’ve been.), but he’d gotten himself into a little media brouhaha (again). So I held off.

It frustrates me. Alec’s really smart, funny and gives good radio. This constant battle with tabloids reminds me of Sean Penn during the married-to-Madonna-days. The press and papparrazzi have his number and love to push it.

Once, when I was an extra on 30 Rock* there was a little dust up with an assistant. I could share the tidbit here and that’s all it would take for a tabloid to mess with him. Whether he was right or wrong wouldn’t matter. I totally understand (too much!) his righteous anger. I, too, hate seeing bad behavior go unpunished and so I will, often to my own detriment, see it through to the end. I will “win”. There’s more to it than that, of course, which will have to wait for another time.

*Oh, you didn’t see my Emmy-worthy appearance as a champagne swilling campaign donor? Well, let me remind you: 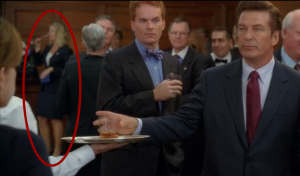