Wow. There’s nothing like (a) seeing two acquaintances on stage accepting their second Emmy, (b) another two acquaintances giving birth to a new female human and (c) an old friend on a national television spot ALL IN ONE DAY to make me feel like (a) I have no goals, (b) no purpose and (c) no future. So, today I (a) made plans to drink and party for the entire weekend, (b) walked around in the cool air with a thin shirt and no jacket to validate my existence and (c) further guaranteed my job security by picking up Jack’s Viagra prescription and snagging two tickets to the Dave Matthews concert in Central Park for his kid. So much for goals, purpose and a future.

If You’re the Only One Laughing, You’re Probably Not Funny 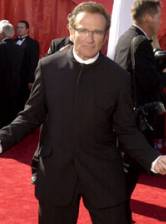 Someone give Robin Williams a valium, please. Watching him chat with Joan Rivers had some very funny moments, but once you give him an inch of approval, he takes it a schtick too far. His most awkward quote was in reference to Gary Coleman. Robin screeched, “Honey, it’s the jockey at the door!” I’m sure he meant jockey as in diminutive horse rider and not the racist lawn decoration. Right? Right??! Eeeew. It was gross to watch. The crack had no point of reference. There it was wedged between a slam on Joan’s dress and a lame quip about the California Governor’s race. Ill-fitting and painful, just like his suit. He looks like a dazed priest.