>We made it. We flew into Baton Rouge with no problems, rented the van, drove two and a half hours to Houma, checked in to our hotel and immediately reported to duty. We’ve been working NON-STOP ever since. We’re tired, it’s late, and we have to check out of this room and move to another so tomorrow will be annoying. That means for a short blog entry. We have some great photos, but it will take me some time to edit and post them.

In the meantime, here’s a quick list of the majority of what we have done:

Lest you think walking dogs and picking up poop is a piece of cake, it is NOT. I assure you. About 80% of these dogs are pitt bulls who absolutely hate each other. Much time is spent navigating their entrance and exit and restraining them much to the chagrin of my white collar hands. They are powerful and “walking” will whittle away about five pounds off the writer by week’s end.

We did reward ourselves with feeding three week old kittens by hand. All four are smoky grey, have opened their eyes and surviving without their mother who was too afraid to be captured. I fed my little one three syringes of formula and massaged it to sleep where it purred deeply, content to live in a barn listening to a million barks a minute. 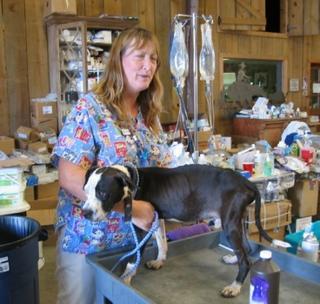 I feel bad for this skinny fella. Not for his bony frame since this is an improvement for him, but because I inadvertently subjected him to a rectal exam. Oops. He is so happy, even after all he has been through, that he wags his tail non-stop. Due to his being in a crate, however, his tail constantly beats against the wire frame causing the tip of his tail to become raw and bleed. While I was walking him, I noticed and alerted the vet. Somehow the message was lost and my guy had a finger in his bum for no reason. They were about to send him on his way when I said, “But what about his tail?” “OHHH, he’s got ‘happy tail’,” they replied. He was easily repaired and, I am happy to report, has no prostate troubles.

—Kambri
and Keith, who is sleeping and has not fully endorsed this message.