>Check this out. I will never understand why famous art pieces get stolen — unless you’re a filthy rich collector of rare and beautiful things simply because you can keep them with no one knowing the truth — the piece becomes worthless and you become a wanted man.

I was at a going away party Friday night and this man was in attendance, as well. I meant to see The Station Agent; I don’t know why I didn’t. 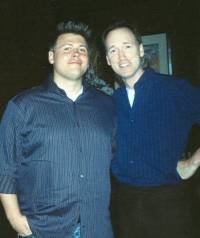 Anyway, looking into his filmography, I noticed this movie set for release in 2006. I love the premise. I hope it lives up to its potential to be dark and vile and cruel and crude. I wish I had known to ask Peter himself.

Here’s a pic of Tom Shillue & Christian at the after party celebrating the taping of their half hour specials for Comedy Central Presents. Their specials should air sometime in January or February. Meanwhile, Christian and I are travelling to LA to meet his manager’s west coast partners. Christian will also

perform at the original, LA Laugh Factory in a showcase for some movie biz types and I will visit at least one, but hopefully two friends that live nearby. One is an actress who just had a baby and is good friends with Bob Saget who just performed with Christian here at the NYC Laugh Factory, is a regular at the LA branch, and just attended my friend’s baby’s briss. What a a small, strange world the entertainment industry is.

Here’s a pic of me & Christian toasting his successful Comedy Central Presents taping.

I wish life was like that picture. It’s not. But lately, it’s been pretty close.