I’ve always fancied myself a bit of a sleuth. In the mid-90s, during my days as a big shot banker, I collected on multi-million commercial dollar loans. To hunt down debtors, I searched all sorts of public records. The internet was still fairly new and most documents were not available online. I became somewhat obsessed with how much intimate information I could find out about a person from yearbook and wedding photos, past and current relationships, favorite restaurants and bars, you name it, simply by going to the library or the local courthouse.

I was in a toxic personal relationship at the time and actually “stalked” a couple of people we knew (in the paper sense of the word) to hone my “skills” convinced I could turn my obsession into a money making business like being a P.I. for hire. Always the entrepreneur, I guess, but ultimately detective work is a tremendous time spent alone which is not my thing. Plus, it’s steeped in negativity.

Fast forward to February 2012. My memoir was going on sale in a matter of days, and I needed something to occupy my thoughts besides the looming possibility of failure, criticism, and public shame. So, I joined Ancestry.com. Minutes gave way to hours that spanned into days of my pouring over legal documents and Google-sniffing out my mother’s family history. Finding a long lost document or a tidbit of news was exhilarating and poignant. For example, I found this article in the Emporia Gazette about my uncle Billy who was killed when a train struck the car he and several other deaf people were riding in. With just one click, I was reading an archived article, documenting the tragic accident. His name, his life and death, were summed up neatly in one sentence:

I burst into tears upon seeing it so plainly. I sobbed for the life cut short and for the pain his family —my family– suffered at the abrupt, violent and senseless loss. My emotions surprised me –I had never even met Uncle Billy– but seeing his name (misspelled) struck an emotional chord in me on a cellular level.

My comfort was knowing that Billy’s story is still alive, like that of his twin sister, my Deaf grandmother Betty. She lives on through her letters I’ve saved and the stories and the book I’ve written. She will always be more than a simple sentence:

After a few weeks, I had reached the end of the family line; or, at least, tired of researching the same few people without results. Trips to government buildings will be needed to get any further. Bored, I considered what other things I could investigate. Then I remembered two postcards picturing the town where our cabin is located in the Catskills. Christian & I purchased them at an antique store in Liberty, NY, and I recalled there had been writing on them.

One was in pristine condition and was postmarked November 18, 1910. The almost one hundred and two-year-old note reads: 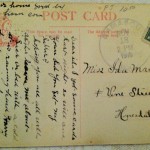 Dear Ida I got some cards last night so will send yours did you get my letter?
Hoping you are all well as this leaves me about sick in bed with a cold it is raining hard Harry has gone over home it was a journey. Over if it had of been a nice day. How is ___? Lula was looking for me last night but I guess she ____ come. Ha Ha. Ira is home. Good by. From Cora.

My clues were rich. A complete address plus names including Ida Martin, Cora, Harry, Ira and Lula. I judged by the date of the postmark and it being addressed to “Miss” that Ida was a probably a young girl and, therefore, born after 1890. I easily found a census report listing Ida Martin, age 37, living in Pennsylvania with her widowed mother, Nellie Martin, age 57. Ida’s birthdate was approximately 1893 making her 17 at the time she received the postcard. Further searches yielded few details since it seems Ida never married or had children.

I turned my search to Nellie. Combing through her records, I discovered her maiden name was Bishop and had sisters named Cora andLula and a brother named Ira! A jolt of adrenaline shot through me. I got antsy pants as I put dots together and searched Cora Martin’s records to find out who she married. Her husband’s name? Harrison.

Bingo! I had found them! Nellie’s siblings Cora, Lula, Ira and Ida were all actually around the same age as Nellie’s daughter Ida. I emailed the few Ancestry users that had the members in their tree and forwarded them the photos of the postcard. They all replied with overwhelming glee at the discovery of what probably seemed humdrum to Cora at the time. Seeing the names of family, the street where they lived, a simple day in their life and, especially, seeing the handwriting fade where Cora needed to dip her pen in a well to freshen the ink transported us all to another place.

My efforts did not go unrewarded. One Ancestry user emailed me back to say that while researching Nellie (Bishop) Martin, she discovered an author named Clara Gillow Clark had written a book. It was a children’s book about her great grandmother named Nellie Bishop.

A lump grew in my throat and, again, I was struck with deep emotion. Nellie and her daughter Ida will be more than a simple sentence, too.

The irony of this story is that the internet is at once the thing that allowed this to happen and the thing that is making precious documents like these extinct. Archived newspaper articles and handwritten letters serve as tangible wrinkles in time allowing us to travel across decades. One hundred and two years from now, will your great grandchild cherish your Facebook postings?

Cora’s card if she were to write it to Ida today: 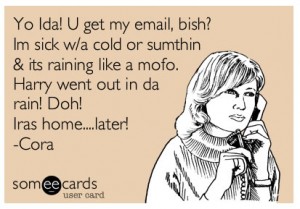