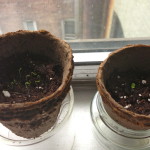 After kicking off my gardening project, I drove home from the cabin so I could take my protege Jeaniah to a preview screening of “Epic” at the Museum of the Moving Image. When I picked her up, she and the other Hour Children kids were having a craft day with volunteers from the Kabbalah Center. We made jewelry, got professional photos taken and planted some flower seeds which took about 20 seconds. Throw some dirt in the peat pot, add some seeds, top with more soil, add water and voila. Four days later they sprouted.

It was a great reminder of what I said in my earlier post: gardening is much more simple than the Internet would have you believe. Don’t be afraid! Jeaniah wanted me to keep both of our pots so I can plant them at the cabin. I plan to find a special spot for our little flower pots to grow together. It’s lousy with symbolism.

Anyway, on to the movie. We were excited and surprised to learn that the director of “Epic”, Oscar winner Chris Wedge, was at the screening and would participate in a Q&A afterward. COOL! The movie is about a teenage girl who is transported (shrunken to the size of an insect) into the forest where she helps the “Leafmen” battle the dark forces after the forest Queen is killed. The movie itself was in 3-D and, damn, animation these days is simply breathtaking. I got dizzy a few times “flying” with the Leafmen on their hummingbirds that they rode like horses. So clever. Check out Metacritic for comprehensive reviews, but we gave it our thumbs up as did the other kids in the audience. 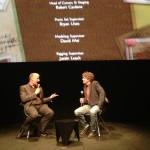 We also enjoyed the Q&A with Mr. Wedge who was really  casual, funny and gracious with his time. Jeaniah seized up with shyness when it came to asking for an autograph, so I asked on her behalf. We wanted to get it mostly as proof to the kids at school that she’d seen the movie before it was in theaters. Last time we did this (a preview of the “Croods” which was okay), no one believed her. So, this time we kept her program and autographed ticket stub for her to use to “show off”. Take that, non-believers!

Christian met up with us at Pizzeria Uno and during our drive home he told her about my undying love for David Lee Roth. When he showed her pictures of Diamond Dave, she burst out laughing and said, “He looks like a GIRL!”

I spent way too much time defending my love and trying to find a better picture. None were to be found. He’s pretty ridiculous in all of them and yet…sigh.

I can’t wait for the day I meet her husband and can tease her about how she wore Justin Bieber perfume.