Continuing from my goal to remind myself of positive plans, here’s what’s in store for  April. (Click to see January, February, March.)

* Give two presentations at the Fox Cities Book Festival in Wisconsin.
* Watch Hedwig and the Angry Inch on Broadway starring Neil Patrick Harris for my husband’s birthday.
* Celebrate the release of my husband Christian Finnegan‘s third stand up comedy special THE FUN PART premiering on Netflix. Filmed at the Wilbur Theater in Boston, it is beautifully shot and directed. Don’t have Netflix? It’s available for audio-only (for now) download on iTunes and Amazon.
* Produce and promote Christian’s solo show THE GORGEOUS MOSAIC at the People’s Improv Theater. It’s 60 mins of his standup & storytelling about his 23 years in NYC and it’s solid. So saith the New York Times, so saith we all.
* Ride every ride at Coney Island as many times possible in four hours. (Thanks, Living Social!)
* Take my protege to meet Sara Benincasa at Sara’s book party & reading for her new YA book GREAT. Celebrate good times, come on!
* Atone for my sin of not watching Game of Thrones by watching all the Game of Thrones.

March ended up being like February: underachieved. I got sick –again!– and the weather stunk and I’ve been unable to focus. But I did go ice skating with my protege and didn’t fall once in two hours. I tutored her twice a week, too. I don’t know if I was of any help to her, but I liked seeing her so often. My event at RIT/NTID was awesome! Check out the video phone booth and poster from the campus. Let’s see if April can break the trend and actually go as expected or better. 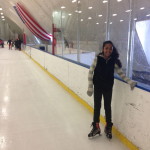 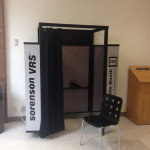 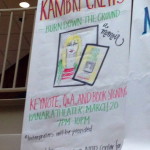