My protégé Jeaniah and I had an awesome date at the Big Apple Circus! In fact, I think this was our best date ever. We were both in great moods, excited for the show and had lots to talk about as we rode the subway to Lincoln Center*. The big tent itself was set up in Damrosch Park. We got our complimentary tickets (thanks again Marianne Ways!) and hit the concession stand where we loaded up on drinks, popcorn, Sour Patch Kids and cotton candy.

J asked, “What color cotton candy do you want?”

“It all tastes the same, so what color do we want our tongues to be?”

She and I both looked at each other, smiled and said in unison, “BLUE!”

Our seats were awesome –we were on the aisle just four rows from the ring!– but being in the round and only about 1,800 seats there really isn’t a bad seat in the house.

The theme was LEGENDARIUM: A Journey Into Circus Past and it was spectacular! Every act was cute, charming or downright thrilling, but we definitely had favorites.

One such favorite was Zhang Fan who performed a slack wire act. I’ve never heard of such a thing and was mesmerized. He made the tight rope seem like child’s play. That rope is taut & still. The slack wire is just that and it’s constantly in motion. On this wavy, swinging wire, he carried out spectacular tricks like doing forward & backward somersaults, balancing himself with a ladder, and riding a unicycle. Upside down. On his head. Pedaling with his hands. Can’t believe it? Check out this photo of him I found online. What an incredible athlete. Olympians should train for the circus. Yowzah!

I also enjoyed the juggling tango dancers. A husband and wife team that danced a beautifully choreographed tango all while the husband juggles balls and clubs. I’m not sure a kid can appreciate how much trust must be there for this act to be possible, but I was awed. I wouldn’t trust Christian throwing clubs all around me, let alone while we’re dancing a tango! But since Christian says I dance like a Sims character, we can safely assume this will never, ever be tested. 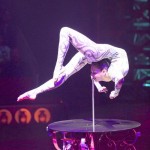 Our favorite performer, no question, was the contortionist Elayne Kramer. Or as Jeaniah said, “I loved Elayne and her flexibility tricks.” The girl was a jellyfish. She can’t have any bones! She folded herself backwards and on top of herself and even held herself up with her mouth (see photo). That’s what blew Jeaniah away. I was screaming, “NO WAY! NUH UH! GET OUT!” every five seconds but was slack-jawed when it came to Ms. Kramer’s final trick. Turned upside-down (you know, how one does), she shot a bow & arrow with her feet. Yeah. You read that right.

Not only did she shoot an arrow, she was aiming the arrow a 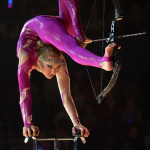 t a balloon, and hit her mark. Holy. Wow. I don’t have a picture of it but found this one online. Incredible, isn’t it? It’s one thing to be born without a spine, but this is skill, people. Strength, training and skill!

Back in Queens, we stopped at my place. Jeaniah wanted to see our apartment**, meet my parakeet and make geodes. I showed her my wedding dress and she tried on my fascinator and had the dogs do tricks for treats. Before I drove her home, we hand wrote thank you cards to Marianne and the Big Apple Circus publicist who gave us the free tickets. Back at her place one of the other kids in the group home said, “You’re her mentor? She talks about you 24/7!” [Sideways huge smile face.]

It was a day we won’t soon forget. We can’t recommend the Big Apple Circus enough. Thank you to everyone who make the show possible. We are still floating!

~Kambri
*Check out this video I took of a cool subway busker we stopped to listen to at the Times Square station.

**I asked Jeaniah if my apartment was what she excepted. She said, “No. I didn’t think there would be this many rooms and I thought you’d have more…what do you call them?”

She gestured with her hands like she was holding little things.

“Yeah! Because you travel all the time I thought you’d have more stuff.”

What can I say? I hate clutter and the dust that goes with it.