>Unbelievable story out of Nairobi from the AP. 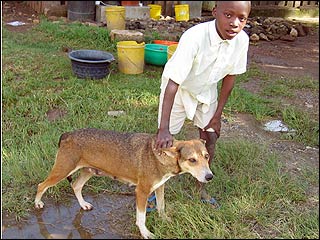 “A nursing dog foraging for food for its puppies retrieved an abandoned baby girl in a forest in Kenya and carried the infant to its litter, witnesses said yesterday.
The stray dog carried the infant across a busy road and a barbed wire fence in a poor neighbourhood near the Ngong Forests in the capital, Nairobi.

The dog apparently found the baby on Friday in the plastic bag in which the infant had been abandoned, said Aggrey Mwalimu, owner of the compound where the animal is now living. It was unclear how the baby survived in the bag without suffocating.

Doctors said that the baby had been abandoned about two days before the dog discovered her. Medical workers later found maggots in the infant’s umbilical cord, a product of days of neglect, Hannah Gakuo, the spokeswoman of the Kenyatta National Hospital, where the girl was taken for treatment, said yesterday. No one has yet claimed the baby, she said.”

Donations are pouring in for the baby, but what about the dog? Who’s taking care of her and her babies? Mary Adhiambo has been quoted as the owner of the dog, but Mary didn’t bother naming the mutt and the poor mutt was foraging for food.

It was just today that I revised my beneficiary on my legal documentation to be the ASPCA. I figure they’ve been around for 138 years (!), they’re likely to be around to make use of my money and eliminate at least one story of a poor animal suffering.

—Kambri
Paquita has a clause, too!