Down to my last few logs leftover from last winter, I dialed a number from a roadside sign advertising firewood. A few hours later, seventy-two-year-old Max showed up in his big honking monster truck at sundown and drove off the edge of the driveway. Any further, and we’d have a big problem. I stepped into my rubber boots, grabbed a windbreaker and raced out of the house. I flagged him down and said he could park right where he was since we would be unloading the wood on the bottom level of the house.

He wanted his truck facing the opposite direction, so I looked on helplessly as he plowed his way to the top of our driveway, turned around, came barreling back down, and skidded to a stop.

Watching him behind the wheel reminded me of when I was eight-years-old, and I drove my cousin’s four-wheeled All-Terrain Vehicle way too fast with skinny little arms steering it. ATVs –like Max’s truck– are unwieldy in the wrong hands! Dad had plopped me on to the ATV with no protective glasses or helmet, just a quick lesson on how to make the thing go. I had shot out of the yard like a funny car drag racer and three very blurry seconds later Dad was disentangling me from a briar patch. After a quick inspection revealed no damage done, Dad apologized for neglecting to teach me how to stop. He showed me the brakes, and off I was again flying through trails till I ran out of gas.

Max had simply graduated from an ATV to a two-ton truck that he drove way too fast with arms too frail. As he backed the truck off the edge of the gravel drive, the very wet earth gave way. I hollered that he should stop. “Let me just get the truck level,” he insisted. Back and forth he rolled, “leveling” the truck and tearing up the edge of the drive and making deep ruts in the mud. As if he sensed my anxiety he said, “Don’t worry, this is a 4-wheeler. I can get this in and out of anything.”

Ya know what Confucius should also say? “Just because you can, doesn’t mean you should.” This is my yard, dill weed!

Using a cracked plastic paint bucket as a step, he hoisted his old, arthritic body on the third try into the back of the truck and proceeded to unload the half cord of firewood at the end of our long walkway. (See photo at left to give you an idea.) The last load of wood we’d had delivered came with two young bucks carrying arms full to a pile they neatly stacked outside our basement door. Max was not a young buck and probably could not handle such strenuous activity. I would have to haul the logs to the house and assemble a stack on my own.

I took a deep breath and reminded myself that he’s elderly, the damage is nothing a shovel won’t fix, and I could use the exercise. So rather than leave him out in the quickly darkening sky without help, I stood in my thin windbreaker and dress, and chatted with Max as he unloaded one. single. log. at. a. time.

When one log went errant, I squatted to pick it up and quickly realized my mistake. In my haste to stop Max from getting his two-ton truck stuck in my ditch, I had run out of the house without putting on my leggings. Showing an old man your snatch has got to be Step #1 in the woman’s version of the book How To Win Friends and Influence People. It happened in a nano-second but I’m sure that even in the dusky night with the eyesight of a seventy-two-year-old, a heterosexual male’s brain is able to compute in a fraction of that time the image of a lady’s beaver. And after spending a week in the woods, a beaver is probably what my gal looks like.

His eyes darted back up faster than I stood and we went along chatting away as though we were none the wiser. Among the things discussed:

— He and his wife just returned from spending the night at Mount Airy Casino where she played the slots and he played poker. The casino puts them up, gives them steak dinner and they have real games unlike the closer Monticello Raceways.

— He has three sons and a daughter. Of the four children, only one bothers to call or have anything to do with him. “They can’t be bothered.” [Insert sound of my heart breaking.] The daughter has three children (a 12-year-old and 9-year-old twins) and is the only one divorced. She and her cop husband split because she cheated.

— Estrous cycles of animals rule their sexual appetite. Because a woman is almost always in estrous, her sexuality is much more fluid. Take deer for example…(I tune out a little at this point because I know about the sex lives of deer and a few logs went bonkers, and I didn’t want to flash the gash again.)

— He “very much believe[s] in God” and he believes in Evolution “because you’d have to be a moron not to. I mean, it’s just common sense when you look at everything.”

— Since humans think we should all live no matter what and so true evolution can’t exist, genocide has served as a man-made thinning of the herd. On his theory he said, “I can’t talk about this stuff around these parts or I’d be run out of town, but I feel like I can share this with you.” [SEE! I told you I should consider running for office!]

I helped Max turn over the metal crate holding the last few logs and he packed up his bucket to leave. He was headed home to his wife whom he’d left sleeping in her rocking chair. Usually she prepares a three-course meal (salad, dinner, dessert), however, the trip was so exhausting and they ate so much at the casino, they were having an early supper of a simple bowl of soup.

As he hopped back behind the wheel he said, “You have my number. Call me if you need any help and if you’d like to join me and my wife to a trip to the casino, you’re welcome.”

“As long as you’re not driving,” I thought.

Max was gone and my previously broken heart was mended and filled with love. 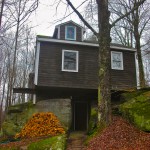 This morning, I was tempted to call Max to say, “Hey, you offered to help. Well, can you help me load the logs into a pile?” I would’ve been joking, of course, but I didn’t want to make him feel bad. So I put on my big girl panties (literally and figuratively ) and got to work. Here is the result of my morning’s labor.