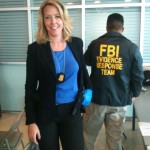 I have been two degrees from Kevin Bacon since 1997. Today that all changed. I was an extra on his new television show The Following which premieres in January. I was in a very, very short scene –think 5 lines and ten seconds– with some guy named Shawn Ashmore and a lady (Ann? Anne?) from Law & Order (though her character on that show {an ADA?} was killed off).

It’s unlikely you’ll even see me, but what a fun day with awesome food and people. A guy got “stabbed,” there was blood everywhere, and I got paid!

Tomorrow I’ll be pretending to walk my dogs in the park and having lunch with my husband.