Continuing from my January post / idea to remind myself of the positive plans I have in a nutshell, here is my post for what’s in store for February:

* Perform the last** of my solo show workshop performances.
* Update my solo show script using info gleaned from my workshop performances.
* Go to DC over V-Day weekend with Christian where he headlines The DC Improv & will see friends while there.
* Perform on three  comedy / storytelling shows. (Info here.)
* Work as an extra on a friend’s TV pilot.
* Watch two Soundtrack Series storytelling shows at MoMI.
* Attend a screening of “Network” and Q&A with David Itzkoff & Keith Olbermann also at MoMI.
* Hang out with my protege during her mid-winter school break.

** Last of this go round. I’m going to stage one more set of two or three workshops to finalize the script and have it professionally videotaped so I can submit to festivals and such.

January 2014’s plans went as expected. It was very busy, with lots of great movies thanks to those SAG screeners. The Los Angeles trip included a meeting with a screenwriter and trips to the La Brea Tar Pits and Getty Villa. Also, I hung out with my protege one day and had the best time ever. We rode down a toboggan in Times Square set up for Super Bowl Boulevard, checked out Puppy Bowl at Discovery Times Square and toured Ripley’s Believe It or Not. 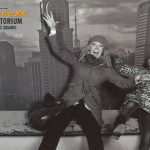 So, all in all, a pretty awesome month! The only downside was that I got very sick for a solid week including one day when I had an almost 103-degree temperature. Scary! It put a damper on my rehearsals for my solo show, but I managed to pull through. The show went on and I was pretty pleased with it.

Let’s see if February shakes out as planned and if anything else fun or interesting pops up.