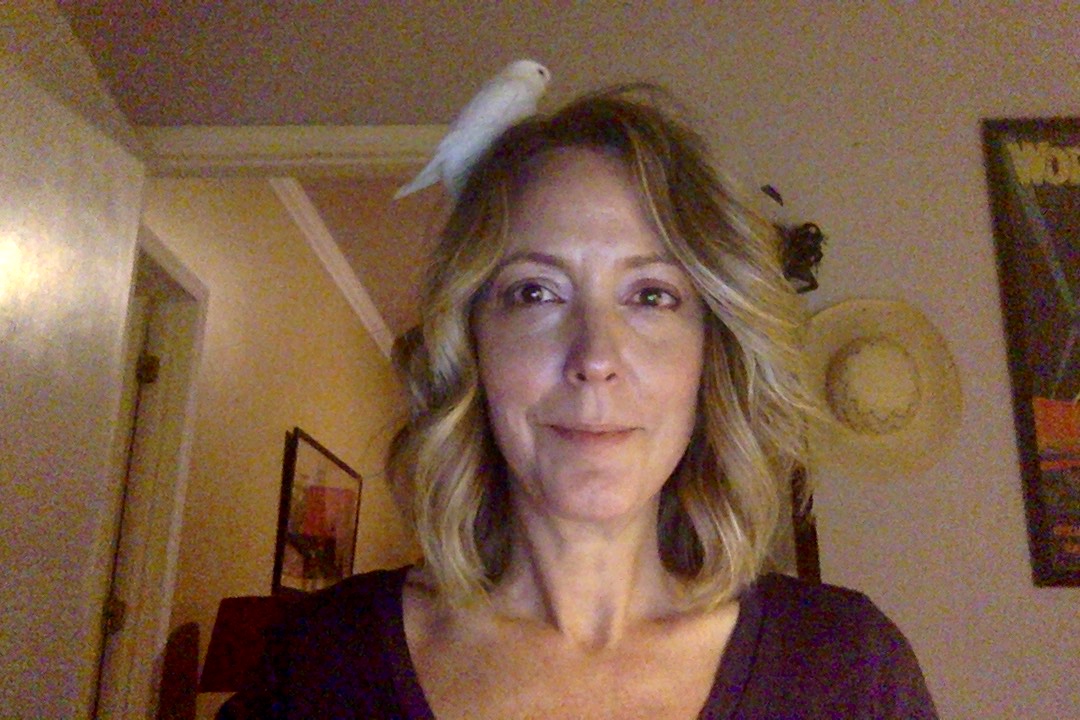 For Thanksgiving, Christian & I drove upstate to our cabin to bury my sweet little budgie Dinah who passed while I was on vacation. She brought us a lot of joy, especially when she played with our dogs, Paquita (2001 – 2013), then Griswold and lately our silly Billy.

The playlist below my post has a few really short, but fun and cute videos of Dinah interacting with all three of them. It was always hard to capture just how funny and brave she was as getting the camera always caused a break in the action.

Dinah and Griswold were like Woodstock and Snoopy. She followed him everywhere, “fed” and groomed him and they both regularly teased each other and played together. She would dive bomb him or sneak up and peck him while he was sleeping. It always scared the bejeezus out of him but she was always too quick and flew away before his eyes were even fully opened. They would even play a “hide and seek” chase game around the coffee table.

Dinah was impulsively purchased around 2007 at a crappy pet store on Steinway Street for $14. Who knows how long she’d been there or how old she was, but she was never afraid of anything or anyone and was always free to fly about putting herself to bed at dusk and waking up with the sun. Her cage door was rarely, if ever closed.

My hope in bringing her home was that she could be a friend to my other budgie Larry who was getting up in age and not enjoying life. She opened up his whole world. He almost starved to death feeding her every bit he could, so I had to separate them until his love for her calmed down a bit. He went from never leaving his cage, to regularly joining her on adventures around the apartment, including playing with Paquita.

He passed in Spring 2010 and within the year Griswold joined the household. It was interspecies love at first sight. She loved his wiry, wild fur and his supreme laziness which meant he was unwilling to move even as she annoyed him. She traveled with us to and from the cabin where she loved the wide open floor plan, high ceilings and all the treasures she could find buried in the sheepskin rug.

Griswold grew less tolerant in the last few years as he gets grumpier with age. Chief Billy Bowlegs, however, is a young (maybe 3 years old now) pup we adopted in 2017 and isn’t aware of the option of simply walking away. This meant Dinah had some fresh meat to peck. Billy is a silly thing, always down to play. I’m certain that the two of them would have bonded, if only they’d had more time.

We hope to bury her next to Paquita, not far from a bird house and at the cabin they both so enjoyed. Right now the ground is too hard to dig, so she’s in an iPhone box in the freezer. And, as much as I loved her, we’re still planning to eat the turkey that sits in the same ice box.

I’m not sure if I’ll ever have another bird. She was so sweet and special to me. My live little fascinator who perched on my laptop, watching and sometimes helping me peck at keys. There is a budgie-shaped hole in my heart and home that can only be filled by her bright white light.