>I wasn’t so good with the six shooter — I didn’t miss, but I wasn’t dead center, either — but my aim with a semi-automatic was even better than last year. I managed to empty my entire second cartridge inside the center circle. There’s nothing like the powerful pop of gun to make my testosterone level skyrocket.

Anyway, Jack said he would buy me a gun for my birthday if I got a permit. No thanks, I’ll stick with pepper spray as my weapon of defense. It fits in my pocket and won’t kill me if I drop it. (I’m a dropper.) No steamers for me this year, instead I chowed on a dozen lobster claws. My! They are TASTY! Really, I just needed to rip apart the hard shell of a boiled crustacean carcass to burn off that extra man juice that was pulsing through me. Then I nuzzled Atlas, Justice & Chase of the K-9 unit, participated in the simulator where you watch a screen and decide if and when to shoot (Apparently it was wrong of me to want to shoot the baby being held hostage. Whatever.), and then some bombs were blown up and then we came home. 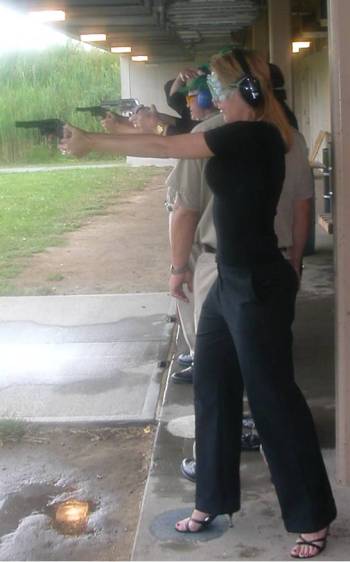 “Booze, Bullets & Bombs” sounds like a good title for my next production.