Either middle-aged, middle-management white males of Grand Rapids aren’t getting laid enough or I’ve found a new target demo. I am HOT in GR! Like “grown men walking into poles” hot.

I checked into my room at the Amway Grand Plaza (yes, the Amway. I haven’t heard of them in years but they’re inescapable in GR.) which is grand, like the name implies and like everything else in the city, and sprawling. They really need to install a map kiosk like in a shopping mall. Even after two nights there, I got lost trying to find my room.

I was a sweaty mess in my jogging clothes after having gone for a run and had a confused look on my face. A man who worked at the hotel (I assume as he was wearing maintenance type clothes but no name tag) cut his conversation short on the house phone and offered to help direct me. But he wouldn’t just tell me exactly where the main lobby was. He gave short vague answers like, “You’re headed the right way,” and kept asking where I was going. “The main lobby, just tell me where the main lobby is.”

At one point he asked for my room number. Now, I’m sure to him he knows the hotel like the back of his hand and having my exact room number would tell him which tower (yeah, they had towers, like we’re all Rapunzel or something. Crazy big!) I needed to be in and which elevator bank within that tower would take me to my room. But, dude, here’s the thing: No matter how nice you are, how helpful you think you are being and how innocent you know you are, if you have a penis don’t ask a woman who is a stranger to you for her room number. I said I’d trace my steps and start over and thanks anyway and left him standing there. I’m 99% sure he was not a rapist but that 1% is what keeps us ladies always on guard. I can hear his argument at the imaginary rape trial now, “I thought we had a date. She gave me her room number…” 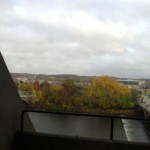 Eh, you know how the victim-blaming story goes. So, anyway, back to Grand Rapids! The hotel gym had a full size pool, hot tub, tanning beds, tennis courts and, my lordy, I wanted to move in! My room had a balcony with an incredible view of the river (What river? Why the Grand River, of course.) and the gorgeous fall colors. I was so happy to be traveling all over the midwest & northeast during peak leaf changing season. This picture just doesn’t do it justice. I could also see native golden boy Gerald R. Ford’s Presidential Museum which I decided I needed to visit simply because of how close it was to my hotel.

My first day there was to give a speech at Grand Rapids Community College as part of the Diversity Lecture Series. I had a quick breakfast and returned to find that housekeeping had left me a note and a voice mail. I had the “do not disturb” sign on my door but apparently they couldn’t believe that I didn’t want service because they called again! I’d been here one night! What could possibly need to be cleaned?! So I said sure, I needed service and had the housekeeping lady zip up my dress instead. Now THAT’s useful!

Sidebar: don’t kill anyone in a fancy hotel. They do wellness checks and just won’t leave your room alone, “do not disturb” sign be damned. I’d recommend the Best Western on Highway 105 in Montgomery, Texas. I stayed there five nights and not once did they call. There were no security cameras, lights, nothing. That is SIX days of getting to Mexico time, people! 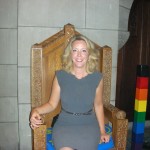 Dress zipped, I met my host from the college for an early dinner and to go over the itinerary of events. The speech itself was held at the gorgeous Fountain Street Church. I’m not a religious person –I think most organized religion is a little too cult-like and abhor anyone who selectively uses Bible passages to justify vilifying and/or discriminating– but I could see myself attending this church. It’s non-denominational and reading their mission made me want to hug an evangelical and say, “It gets better.” That’s me pictured on the left sitting in the preacher’s (? preacher, minister, I dunno what you call them) chair and a big rainbow stick. Not sure what that’s for but it made me happy the way rainbows should.

My host said I was joining a distinguished list of speakers of the series and warned me not to get intimated when I saw the church’s green room. I thought she was pulling my leg until I laid eyes on the photos of Helen Keller, Amelia Earhart, Susan B. Anthony, Robert F. Kennedy, Malcolm X, Gerald Ford (duh) and so many more. I was almost embarrassed to add my name to the list. Almost.

The church was filled to the rafters and the speech was an A- (a technical glitch where the laptop with my PowerPoint suddenly died prevents me from giving it an A+ but it was pretty fun). I met some truly remarkable people, especially those working with the college and the diversity series. They love their jobs and make a difference and dammit to hell I’m getting choked up again!

I’m so glad I elected to spend an extra night there because it allowed me to take in some sights and sounds of this lovely riverfront city.  I visited the lecture series’ corporate sponsor Steelcase (WOW! I want to go to design school just so I can work there. The building and people were amazing!) and gave a short presentation and Q&A. Afterward, I had the day to play tourist. 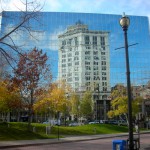 I ate a quick burger at Flanagan’s Irish Pub. I’m sorry to say I didn’t try out more local-centric restaurants in GR like I did in Madison, but I wanted a greasy fat burger and pubs are good for those. They didn’t disappoint. Happily stuffed, I walked to my first stop, the Grand Rapids Art Museum (GRAM).

The GRAM had a special exhibit called Real/Surreal which compared works of realism vs. surrealism with most of the paintings on loan from NYC’s Whitney. DOH! Along the way, I caught a glimpse of this building reflected in another. I don’t know if they planned it this way but it looked like a life-sized, glued together puzzle picture. I couldn’t get over how perfect and real it looked. Talk about Real/Surreal! 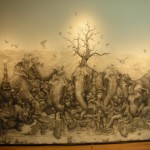 But they also had on display some of the winners of this year’s ArtPrize. Man, did I luck out on seeing these. Without these pieces, I think I would’ve felt the museum trip to be a bit of a bust. Instead, I was bowled over by “Elephants” by Adonna Khare, a giant penciled mural overwhelming with it’s detail and humanity and, my lord, how does one person possess so much talent?! Please, please check her and her prizewinning piece out. You won’t be sorry.

Excited to learn about ArtPrize and in love with “Elephants”, I asked the security guard where I could find more winners. He directed me to “Origami” by Kumi Yamashita. This gem tricked me at first. I was directed to find it and walked passed thinking it was just a bunch of square papers on a wall. Oh, how wrong I was. It’s so clever in its simplicity and very thought provoking. I thanked the guard and laughed with him how I thought it was stupid at first. 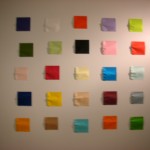 Then he asked, “Did you see me?” Wait. WHAT? He’s one of the origami pieces? GENIUS. Click on this link, and you’ll understand what I mean. So cool.

Thank you to GRAM and ArtPrize for introducing me to these talented women artists. Never in my life have I left an art museum so excited to share my experience with anyone. If you have a chance to go before December 31st when the ArtPrize pieces will no longer be exhibited, I highly recommend it. 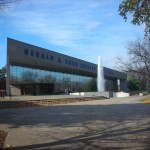 Finally, my last stop on the grand tour was of the aforementioned Gerald R. Ford Presidential Museum. It takes only a few hours in Grand Rapids to realize that they looooooove Jerry. He is the pride and joy of this town. His name is plastered on everything. I’m surprised there’s not a Ford Fun Park or a burger named after him. After learning about our 38th president and getting a free ruler with my gift shop purchase, I, too, loved Jerry. He seemed like a really nice guy. I guess it is his museum and burial site so what are they gonna say? I couldn’t tell you since I’ve not been to Nixon’s. I started openly weeping at the section covering his death and funeral. 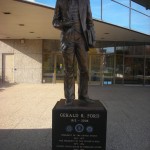 Sidebar: Is crying a lot a sign of perimenopause? Because if you haven’t noticed, I’m crying or getting choked up at everything?! That said, I found myself transported to my early youth. I remembered vividly watching news reports of Nixon’s impeachment and Ford’s ascent to the highest office. I love our country, and the process, while flawed, does work.

I left the museum feeling immense pride and even more grateful that our country wasn’t created and founding fathers didn’t live in the late 60s/early 70s or else we’d forever be barraged with its clothing. Egads. 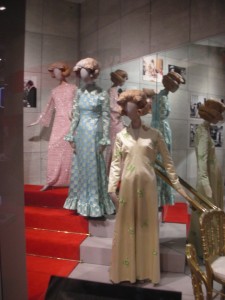