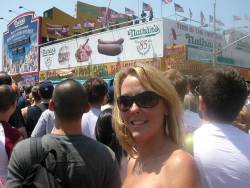 FYI, Christian and I tied at two each. 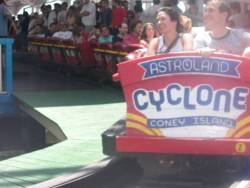 Next stop: The Cyclone. I actually did get mild whiplash. What a piece o’ shite. Per the aforelinked site, “The Cyclone has consistently ranked at or near the top of every roller coaster top ten list published.” Clearly these aficionados are buffs for nostalgia and are not rating the coaster for performance and overall thrills. The first hill provided mild butterflies in the belly but after that I was beaten like a rented mule. I wonder how many necks have snapped? Tongues have been bitten? Brains traumatized? Rough.

Most unexpectedly scary as hell ride was Saturn 6. I’m not sure when I became such a wuss — I can’t say with 100% certainty that I actually am a wuss until I’ve been back to Cedar Point — but I was terrified. Why? It came so bone-chillingly 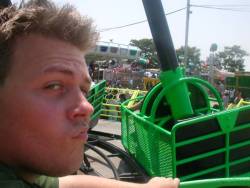 close to a tree, the roof of a building, some electrical wires and, well, let’s just say the ride operators were about 12 years old and a bit pre-occupied with some hulking dude (“HD”) who was pissed that his little tiny, eensy baby wasn’t allowed to ride. It actually resulted into a bit of a shouting match which trickled off the ride and ended with the HD’s baby momma hitting HD in the mouth! I kept imagining the HD storming the controls and killing us all. I wanted off. The ride stopped finally and I saw one of the operators carrying the baby off the platform. In the midst of the scuffle, HD’s eensy baby had wandered onto the ride — luckily after the ride had stopped completely. Oy, decapitated babies are not my idea of a happy holiday.

Normally my favorite ride is the Zipper, but after Rob P. told us he saw someone welding it earlier, I opted out. Ah, Coney Island, you gotta love it.

It’s a little big for her to beat around so I’m trying to teach her how to hump it instead of my arm.

Final stop: Home! We have a great view of the city from our bedroom window and our rooftop connects with so many other buildings we were certain to have a great view near the comforts of home. But we didn’t plan a gathering — no time since vacation and without actually having witnessed a July 4th from this new apartment, we didn’t want to risk disappointing friends. Instead, we sat on our fire escape drank wine and enjoyed the fireworks and our awesome view. Sadly, my digital photo isn’t good at the night shots but here’s an idea of how it looked early on before the smoke covered the Empire State Building & the Chrysler Building.