>First: Tune in to the Today Show this morning at 7:41 AM when Christian Finnegan, Chuck Nice and someone else (Rachael Harris, maybe? She’s in town but she was just on the Today Show yesterday.) do a Best Week Ever segment. In case you miss it, I’ll take photos and recap as usual. (I’ll do anything for a free ride in to the City and breakfast on NBC’s dime.)

Second: Todd Levin did kill at his taping of Premium Blend for Comedy Central. No joke. So did Craft Services. I stuffed myself on steak, a freshly roasted turkey, chocolate things and cherry tomatoes. It was Todd I went to see on the night I met Christian. Todd hadn’t been doing stand up that long, so it’s very cool to see him just a few short years later completely win the crowd with his crafty writing and performance. 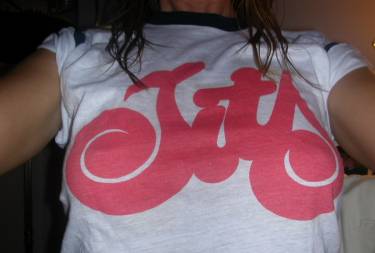 Fourth: Here’s that ticked off eel that lives at China 1. It was thrashing about and biting the water revealing its third row of vertically lined razor sharp teeth. Freaky.

Fifth: Here’s Rule of 3 Productions and me at the This Isn’t Working after party. From left to right: Francesco Marciuliano (Writer), Carol Hartsell (Producer/Designer), Jefferson Jowdy (Director) and me (Nobody).