The holidays tend to bum me out, and I felt like I hadn’t accomplished much in 2013 and don’t have much to look forward to in 2014. That’s just the silly holiday blues talking. So, to remind myself of the positive plans I have in a nutshell, I’m going to write an entry at the top of each month about the weeks ahead.

Going to Los Angeles and Cleveland,
Producing & performing my solo show at the The Peoples Improv Theater,
Promoting shows for NYC PodFest,
Seeing a half dozen comedy shows or more,
Performing on a few others,
Celebrating 11 years with Christian Finnegan,
Getting a haircut and going for my tri-annual teeth cleaning. 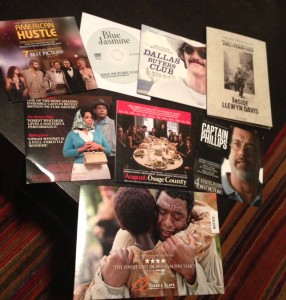 After I wrote this, we got the mail and received a bunch of screeners from the Screen Actor’s Guild of which Christian is now a member. We’ve never gotten anything like this before so we were very excited to see our mailbox spilling out with such great movies.

I’m sure veterans of the stage and screen don’t get all atwitter for these, but to us it felt like Christmas morning! They arrived just in time for a 10-inch snowfall and bitter cold in NYC and our trip to Los Angeles, so we’ll have plenty to keep us company.

So, yeah, there is a lot to look forward to. Now let’s get this party started!