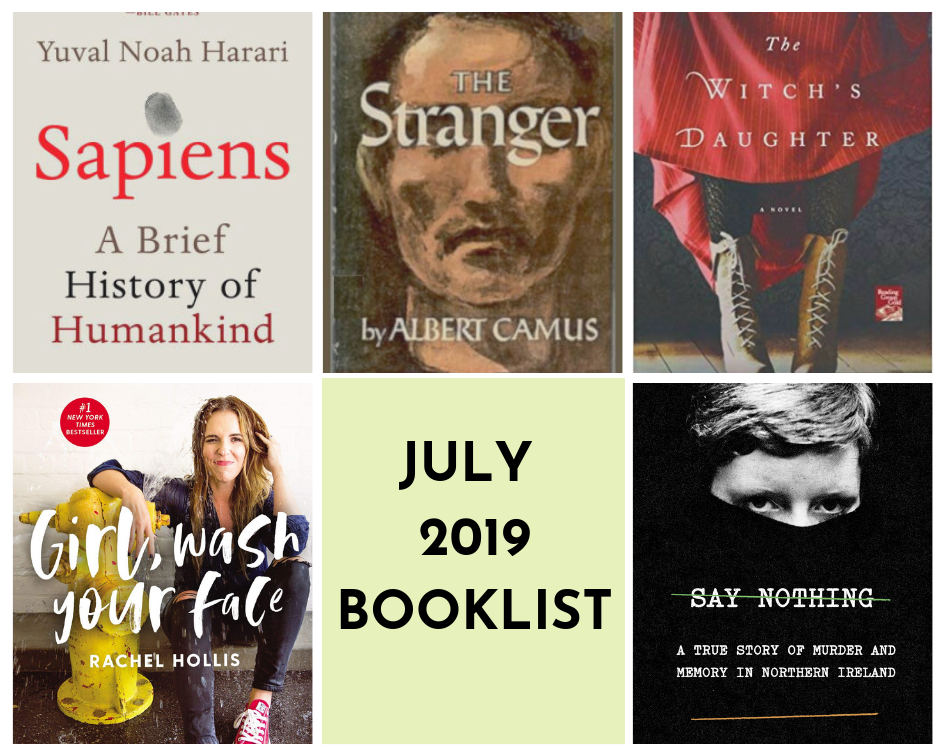 The Stranger by Albert Camus – A French classic from 1946 which I bought and read in one sitting back in 1998 or 1999. Cracked it open for another read as I really don’t remember why I bought it then or really anything about it. It’s a slim book and easy read. The main character Meursault is an apathetic atheist who goes along with things in detached, unemotional ways and says exactly what he’s thinking without regard for how others might feel or perceive things. He’s a bit divorced from reality. He strikes me as being on the autism spectrum. The 2nd half of the book is where it gets a little more existential, though Camus rejected the claim that his book was about existentialism. So…anyway, it’s good. It’s easy. It makes you think if you allow it.

Girl, Wash Your Face: Stop Believing the Lies About Who You Are so You Can Become Who You Were Meant to Be by Rachel Hollis – I read this because it’s like a crazy top bestseller and was looking to branch out on the types of books QED carries. I didn’t really know what it was about other than a little self-helpy and those do well at QED.

But, man, people are NOT fans of hers and people who love her, reallllly love her. Her critics call her self-absorbed and disingenuous, living a sheltered life with only one intimate life partner, with no real struggles and that her advice is downright dangerous (she’s not an expert in mental health, domestic violence, etc.) and some of it is simply regurgitated from other writers. She’s pretty, white, rich, has a nanny, etc. and there are more important, valued women writers whose voices are more worth listening to.

Her fans will say she *has* gone through things and is sharing her honest perspective based on her own experiences.

I can see both sides and am glad I didn’t read the reviews before diving in to this book, because I did enjoy it in spite of catching on to some of those criticisms (The faux “y’all” dialect drives me bonkers, for example…you are not southern, girl. Just stop. It’s an attempt to sound hip and casual and regular.) As I’ve said before re: going to seminars or workshops and reading self-help books, etc.: If I learn as little as one thing, it is worth it. The one takeaway I got from this was that if I make plans with myself (write, paint, exercise, whatever it is…) and then bail on those plans, what kind of friend am I to myself? Would I stay friends with someone who was constantly reneging on plans? No. So why do I do that to myself? Also, this sets up patterns and expectations so that when the plan is made, I already know I’ll bail. Good advice. Whether it comes originally from her or not, I got it and made a note to myself.

Say Nothing: A True Story of Murder and Memory in Northern Ireland by Patrick Radden Keefe – A very detailed account of “The Troubles” in Ireland. I recall as a young kid being frightened and confused by news reports, but could not tell you really what it was all about. This book was suggested as a true crime story — the mysterious disappearance of a widowed mother of 10– occurs during these times. As it turns out, it’s mostly a freakishly detailed historical account of The Troubles themselves. Some reviews have been critical by saying the author doesn’t present a balanced view of events between the paramilitary IRA groups and the British loyalists and army. I also wish there were more personal interviews and accounts and less transcription of fact after fact after fact. It got pretty exhaustive and redundant. But, hey, now I know more today than I did yesterday and that’s all thanks to the reporting in this book.

Sapiens: A Brief History of Humankind by Yuval Noah Harari – There’s a super long waitlist for this book so it’s the hit of the summer, I’d say. It’s a look at the whole species of us from gamillions of years ago to today.

From the publisher: One hundred thousand years ago, at least six human species inhabited the earth. Today there is just one. Us. Homo sapiens. How did our species succeed in the battle for dominance? Why did our foraging ancestors come together to create cities and kingdoms? How did we come to believe in gods, nations, and human rights; to trust money, books, and laws; and to be enslaved by bureaucracy, timetables, and consumerism? And what will our world be like in the millennia to come?

I found it interesting and really enjoyed how most things like corporations, religion, the USA and its constitution, etc., all require us to use our imagination and collectively agree that these things are real even though we completely made them up. Religious fanatics will probably hate that, but it’s all fascinating to me.

The Witch’s Daughter: A Novel by Paula Brackston – This is the 2nd book of hers that I’ve read. The first being The Little Shop of Found Things: A Novel which I reviewed last month (or the month before?). I loved that one likening it to Outlander (which I don’t watch; I’ve seen bits of one episode, and apparently it’s very good). Anyway, like the Little Shop book, this one goes back and forth between the past and present and has witchcraft/supernatural elements mixed in with some historical fiction. Here, the main character who practices as an herbalist in present day, befriends a teenager and mentors her about herbs and spells. Along the way she tells her a tale. In doing so, we are transported in time to three separate eras. I won’t spoil anything, just know that it’s filled with some pretty intense sexual violence and gets pretty bonkers so might not be for everyone. I didn’t enjoy it as much as the 1st book of hers I read but did still like it, mainly because it’s so fantastical it helps take my mind off the very real stuff of work and family.

Milkman: A Novel – It’s December 2019 and I just realized I had read this book and forgotten that I had. Went through my history and didn’t even add it to my reading list / reviews. So, I guess I didn’t really enjoy it that much…so forgettable? But my friends and critics love it so maybe I read it too quickly or was distracted. I do remember it being after “Say Nothing” which had exhausted me on IRA paramilitary stuff.

Alright, so that was July! I went to the Grand Canyon at the end of the month and gearing up for the trip had me focused more on that than reading. I don’t really enjoy reading books on planes I’ve come to realize. Magazines, crosswords, documentaries and news articles are more my jam, so I indulged in all of that during my travels.