A 21st century birthday is like no other thanks to Facebook giving folks the heads up. Thank you everyone for the emails & comments & phone calls & texts. It never fails to overwhelm.

Christian was headlining in Atlanta, so I chose to spend my 41st birthday with my lice-free, nine-year-old protégé “J” from Hour Children, a non-profit dedicated to supporting incarcerated women and their children. After two postponed dates due to “dem bugs” infesting her head, I took her to the Spy Exhibit at Discovery Time Square Museum followed by ice cream for dinner.

During our subway ride she gave me a birthday card. She could hardly contain her excitement as I opened it and giggled and squirmed in her seat like she might pee herself. If she had, it’s the NYC subway so no big whoop. Pee on yourself all you want little lady. Here is the card: 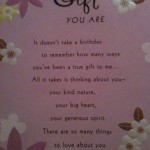 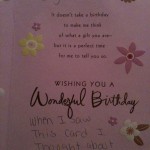 Man, you could have ended my birthday right then and there before we even got to DO anything and I would’ve been fine with that. What more could I get than the love, admiration and appreciation of a little girl? Tears, people. Gives me big ol’ crocodile tears.

But, we were on the subway on our way to learn about spies! Taking a kid whose parents are in jail to an exhibit about all sorts of illegal activities and the consequences of such was either a bright idea or a really dumb one. But it was interactive, educational and fun. We took our photos & added wigs, glasses, facial hair and hats to disguise our images and there was a laser maze we navigated like Catherine Zeta Jones in “Entrapment”. But my derriere was less like this: 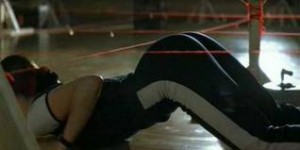 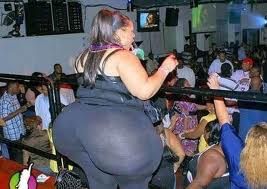 In spite of all the fun things, we surprisingly spent most of our time going over a timeline of major world events. Using a touch screen, we selected a year which then gave us dates to choose. One at a time, I educated her on events like the falling of the Berlin Wall, World Wars and Vietnam. Man, kids don’t know ANYTHING!

I kept expecting her to get bored at the history lesson, but she wanted to know more. Especially about the capturing of terrorists, 9/11 and the killing of Osama Bin Laden. It was his photo on the big screen that had attracted J to the exhibit.

“I’ve seen his picture on TV!” She said as she ran over to the display.

I trailed after her. “Oh, yeah, that’s Osama Bin Laden.”

“He masterminded 9/11. Have you heard about that or the World Trade Center?”

Nope. She hadn’t. She didn’t know about the buildings, the planes, nothing. She wasn’t even born. So with each event on the timeline I explained the whole thing. “I don’t like that man!”

Yeah, me either, kid. Me either. All this talk led to more questions like just why did he hate us so much which led to thoughtful discussions about different religions, extremists, and tolerance. She’s a smart one this girl and quick and thoughtful. I don’t know how often, if ever, current events & such heavy dialogue are part of her life but I’m glad to be there to answer her questions with patience and honesty.

As we meandered through Times Square, we saw all sorts of weirdos, people in costumes, a guy with eight rats dyed a rainbow of colors sitting on his shoulders and a beautiful dragonfly that seemed attracted to me & J. Let me repeat that: we saw a DRAGONFLY in TIMES SQUARE. I’ve lived here 12 years and have never seen a dragonfly in a park let alone Times Square. It flew with us for a block and even hitched a ride on her arm.

She kept saying this was the “most fun ever” then added, “Weird, but fun.”

I told you she’s smart. Life is fun. Weird, but fun.