>Christian & I ran into subway woes on our way to our usual Saturday Double Feature and Dinner Date (SDFDD). We both were unexpectedly famished, already past the starting time of our first feature and much too far from the theater to dine at our usual SDFDD eatery, Baby Bo’s.

I remembered once having brunch nearby and asked Christian to let me lead the way for a bit even though I couldn’t remember the name, street or avenue of this place at which I ate once about six months ago. Gamely he agreed. We walked towards my phantom destination when we approached a pub that Christian recalled as being rich in history. We were both so hungry — my hands were shaking — that we decided to stop in even though neither of us were in the mood for pub fare. Ah well, beggers can’t be choosers and I had led us several blocks away from the plethora of restaurants located in Union Square.

After a bit of complaining on my part about the MTA, lack of proper signs and announcements alterting straphangers of re-routing, the dinner prices on the lunch menu, wanting Baby Bo’s frozen margaritas and quesadillas, I settled in to my booth. My eyes kept being drawn to the pictures of the 1985 cast of an off-Broadway production of Gift of the Magi and news clippings and letters on the wall and I wondered about this, the oldest continually operating bar in the history of the City of New York called Pete’s Tavern. 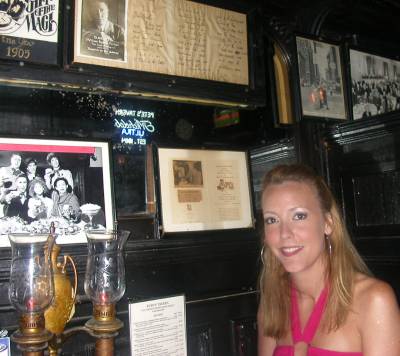 As it turns out, this bar was established in 1864 and O. Henry wrote his short story, the aforementioned Gift of the Magi, in the very booth Christian and I had chosen to rest our hungry, cranky selves. We had stumbled on to something very unique in our effort to go see Shrek 2 and Anchorman: the birthplace of a classic tale. It’s a story I refer to often — a fact that didn’t escape me or Christian. “I love that story. I tell it all the time! I use it as a reference all the time! Uncanny, isn’t it?” I asked him. “Really! Strange!” He answered, with an incredulous look.

We read O. Henry’s framed letters that were faded and damaged from time. We read the history of Pete’s Tavern and how they stayed open even during Prohibition. We took photos, paid our bill and stepped back out into the sunshine and heat. And there it was right in front of us, “Friend of Farmer”, the brunch spot I had been meandering us toward was literally across the street. Somehow we hadn’t seen it despite it’s vast size and unusual name. O. Henry, you little devil! You’re still working your magi-c after all these years.

Our SDFDD ruled. We took a cab home.