Before New York and before Cincinnati, I was living in Columbus, Ohio with not much to do other than drink and eat and sleep and work. What a dull town for a post-college age woman with no interest in children or marriage. Needless to say, I found myself drinking, eating, sleeping and working too much. With no theater scene to be found, I landed a role as “promoter”. A couple of NASCAR events and lots of Stoli vodka later, I invited my mom and her mother to come visit. 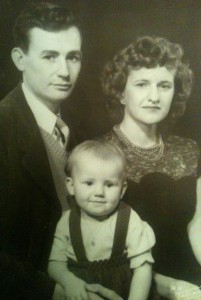 twin brother Bobby were deaf as was their older sister, Wilma. Grandma dyed her hair jet black and wore bright red lipstick every day, even if she were just puttering around the house in her terry cloth slippers and housecoat. She subscribed to the National Enquirer, and kept back issues piled in a stack near her recliner curiously mixed with Archie and Jughead comic books. She never missed a single episode of The Price is Right or Young and the Restless. She didn’t vocalize much, but when she did, hers was a husky, gravelly voice from years of smoking a pack of Winstons a day. She kept her cigarettes in a leather case and her lighter was emblazoned with an eagle made of turquoise, her birthstone.

I spent many summers living with my grandparents. Grandma told me that having me around was like having a miniature version of my mother. I gave Grandma a voice, making her day-to-day life a bit easier. I accompanied her to doctors’ appointments, the pharmacy, the bank and the shoe store, where she gave me instructions on her various needs. Girls at school could keep their silly role-playing games of doctor or bank teller. I was living the real deal.

Now 78 years of age, deaf and widowed, life was different. Her house was no longer the hub of activity with Deaf friends and family coming and going. Instead, she lived alone in a small apartment or split time living with each of her daughters, my mom and aunt.

But never once did Grandma say “No” to an invitation to tag along, even if this meant hitting every seedy night club hawking the new flavored vodkas Stoli had to offer with her granddaughter in Columbus, Ohio.

That’s how, one night, we found ourselves at the infamous Red Party held at the biggest gay bar in town. There were gorgeous drag queens and transsexuals doing dead-on impersonations of Whitney, Liza and Barbra, lots of leather and latex, and an abundance of gratuitously exposed skin.

Minutes after we arrived, we spotted a barely legal young man speaking in sign language. “What were the chances?” We marveled. I introduced him to Grandma and learned his name was Brian. He was from Iowa and, not out of the closet back home, had traveled to Columbus specifically for this gay olde time. He spent at least an hour chatting with Grandma and they hit it off.

“What a nice boy,” she signed to me. Flurried hands, free shots of Stoli, laughter…she was having a ball. No pun intended.

Soon, Brian was blitzed and began acting how, I suspect, he would have behaved earlier had it not been for the distraction of a 78 year old deaf woman in a gay nightclub during the Red Party where he knew no one. No one else but Grandma until he started making out with another man whose name I never got and I’m sure he never did either.

The kissing progressed until Brian was performing an extremely provocative striptease/lap dance for his suitor just inches away from Grandma. Brian was down to a g-string, yet Grandma wasn’t agog or aghast or disgusted or confused. She sat on her bar stool watching them with the same curiosity you might display at the primate section of the zoo. “They’re so like me; yet not at all.”

I watched her watching them when Brian and his new friend disappeared. Grandma exhaled deeply and signed to me, “W-o-w! I have never seen a man strip and dance like this. Oh, sure, I’ve seen women strip before, but never a man!”

Just like that she reinvented herself to me. Here stood before me a woman who wasn’t afraid of trying something new without judgment, defying convention of what a mature lady should do and, well, just having a plain old good time. I don’t know why she was at a strip club the week before, but today she was with me at the Red Party and I loved her all the more for it.

I’m so happy she lived to appreciate the internet and embraced the technology that knocked down the barriers of her deaf world. I’ll miss serving as her “assistant” by interpreting for her . I’ll miss her laugh and the hours of SkipBo we played. Mostly, I’ll miss asking her to tag along with me on an adventure knowing she’ll say, “Yes.”

I love you, Grandma. 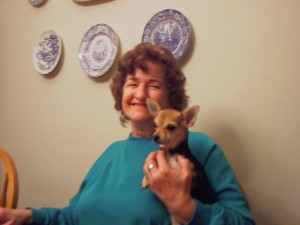