Since my book tour and promotion is coming to an end, I’ve been a little bored and wondering what I should do next with my life. I’ve been a publicist, producer, paralegal, paraprofessional, promoter…so obviously something that starts with “P”. But I’ve also been a writer, blogger, actress, teller, data entry clerk, vice president of a bank’s commercial collection department and a secretary. Basically, I’m up for anything and keeping myself open to possibilities which, hey, that starts with “P”! 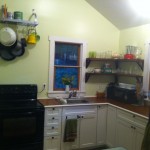 For a brief moment, I thought, “I should take a cooking class!” Then I remembered I’m not a Meryl Streep character. If anything, I’m more like Diane Keaton in Baby Boom minus the baby. (Hmmm….maybe I should adopt or inherit a kid?! Okay, someone take away the bottle, because clearly I’m drunk for even thinking that.)

But as the daughter of a carpenter and having dwelled in the woods, I have more intuition and practical skills than Ms. Keaton did in that movie. My only bonehead mistake thus far is flashing an old man my “flower” and not holding one nostril as I attempted a farmer’s sneeze yesterday as I stacked my wood pile. This resulted in a jellyfish like blob that dangled from my nose which I wiped off with the sleeve of a sweatshirt. No worries, it was Christian’s so I was fine with that. (Hey, Christian, you might want to wash it before you throw it on again.)

Meanwhile, I am enjoying cooking at the cabin. Time in the woods means I must plan and cook meals for myself since takeout isn’t an option and restaurants are pretty far and expensive. Plus, I have a lovely kitchen that I’m getting to know how to use. My crockpot has been a good friend (1 pot for cooking + cleaning = brilliant!) and grilling in nice weather has been equally delightful. But after two years, I’m starting to spread my hot glued Martha Stewart wings and try new recipes. 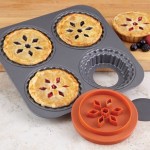 My latest obsession is how to recreate Panera Bread’s yummy egg soufflés since there is no Panera within a hundred miles or so. I found a few knock-off recipes online but the problem is how to cook them. So now I’m salivating over this Chicago Metallic Pie Mold. I can make the Panera soufflés, chicken pot pie, individual dessert pies and who knows what else?!

Add to my Christmas wish list along with a wood stove steamer. It took me three winters to discover that I could add moisture to the air by heating a pot of water on the stove. I threw in a few cinnamon sticks for aroma and now want to make tea with the cinnamon water. I don’t even drink tea but that’s what this place does to me! It makes me open to “P”ossibilities!