It was picture day at prison, so I wore stripes. Dad didn’t look scary like he did during the last visit when he had a shaved head and sallow complexion. This time he had hair (not a gray to be found even at almost 65 yrs of age!) and had a nicer, more flattering pair of glasses. He had taken the lenses out of his ugly “Buddy Holly” prison issued prescription glasses and shaved and shaped them by sanding them down on concrete to fit inside the more attractive frames of a pair of cheap reading glasses. The ingenuity! 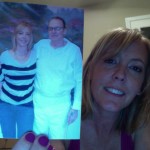 I bought two photos thinking we would get a picture together and one of Dad by himself, but he protested. Why would I want a photo of just him? I really don’t know. He is enamored of the photo of him in his old cowboy hat (The same hat one of my aunts plucked out of Dad’s belongings after his arrest and gave to her grandkids to play cowboy and Indians. Not cool.), and I thought he’d want a more recent one of himself.

When I think about it, though, why would he want a solo shot of him in prison whites? I jokingly suggested he could use it to find a lady friend online. He said, sure if I’d help him find one. Ummmm, no. No, I will not help him find a lady friend. At least not until he admits he tried to kill the last one. So we used the two pictures to take close up and full body shots.

Dad and I had a great visit. We discussed banal things like his wanting a new pair of New Balance sneakers to current events such as the liberation of Libya and the Occupy Wall Street movements and random subjects like bullfighting and child molestation. Dad said a doctor once told him that if a girl has sex before she’s had her first period, her vagina is irreparably stretched. What? Huh? GAH! I want to look it up, but I don’t want that Google search infecting my computer’s history. HA! Lord, my dad and I have some of the weirdest conversations.

We also talked about his upcoming review by the Parole Board. This June will be the first time he is eligible for parole. I explained the process and we both agreed it’s unlikely he will be released. He wants to be, of course, but I don’t think he’s ready. He’s never admitted guilt, taken responsibility or had any counseling to address his drug and alcohol abuse and anger management issues. The latter, I discovered, is because the prison doesn’t provide an interpreter for those services. That is a direct violation of basic ADA laws. I’m going to look further into this, because those issues are exactly what landed him in jail in the first place. Without dealing with those demons, he will simply hurt someone else or their property and be back in the clink.

And, just like clockwork, he proved me right. I had stepped away to get us more drinks and candy from the vending machine. As I walked back I saw a “guard” trying to tell Dad something. I say “guard” in quotes because at about 5′ tall and over 60 years old, she isn’t guarding anyone or anything. She is simply there to greet family and tell them which table they’re assigned to. Apparently while I was getting snacks, Dad had gotten up to throw away our trash. He did this twice, walking back and forth. That’s a no-no. Oops. I would’ve just said sorry and made a mental note not to do it again. Not a big deal, right? Well not to Dad.

Being scolded was enough to make him furious. His face was so screwed up with anger, his skin flushed red and eyes turned black as he flipped his arms and hands angrily at her to get lost. I intervened and as she walked away I reminded Dad to not cause trouble. “Your mantra needs to be, ‘Parole Board, Parole Board, Parole Board.'” With that he laughed and his normal color was restored.

But that flash of rage he demonstrated about a minor thing while he was completely sober, the contempt he carries for authority and rules and the disrespect he showed an elderly woman was enough for me to see that no, no he shouldn’t be released. A knot in my throat formed and tears welled up. My father is broken. And all the king’s horsemen and all the king’s men, can’t put my dad together again.