Since opening QED in 2014, I haven’t been able to travel save for the occasional trip to upstate. My mind, body & soul were aching for a vacation. I have major wanderlust and it’s been straight-jacketed for over 4 years as I nearly killed myself with exhaustion and stress opening and running my little theater and going through cancer treatments.

This past August, Christian announced he’d be enjoying a full month in Edinburgh, Scotland to stage his solo show “My Goodness” as part of the Edinburgh Fringe Festival. I was jealous. Utterly, completely, unabashedly jealous. It also meant I was left to care for two dogs and QED solo in the heat of summer for a full month. Doable, obviously, but not ideal. As a thank you, Christian promised me a full week of being “me” at QED while I took a vacation.

September and October were jam-packed with QED stuff, of course, but I also threw my whole heart, soul and body into working on the midterm elections. Win, lose or draw, I decided that the morning after Election Day would be the perfect time to unplug. Where best to do this? Why, Santa Fe, Sedona and the Grand Canyon, of course!

Our election night party at QED was bumping, packed to the gills and full of excitement as the results came in. I left at the crack of dawn for LaGuardia. People love to hate on LaGuardia. But I was out the front door and at my gate in 21 mins, including a pit stop for coffee and a banana. Not my record of 12 minutes (!!! Not joking. I once did this in twelve minutes.) but there was construction and it was a busy work day during rush hour. Seriously.

I got in late thanks to a layover and needing to get a rental car. Driving in the pitch black backroads of Santa Fe was a little scary, but I was checked in to my hotel and had a great travel day of reading and writing and last minute work stuff.

In the morning I realized those backroads were not back at all, they were pretty regular and very near the city center. They just don’t have street lights or giant buildings and people must go to bed with candlelight or something. I was thrilled to discover I hit the sweet spot with fall colors, too. I always think of the northeast for “leaf peeping” season but, lo! The cottonwood is a showstopper. 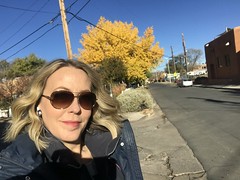 I love a good walking tour, so I found one that started at noon leaving me time for breakfast in the town square at the Plaza Cafe.

Chiles are everywhere here. In restaurants, they’re in practically every dish (even dessert) and ristras (dried bunches of chiles on a string) are hanging all over the place. There are two kinds of chiles: green and red. But the red is simply a ripened green chile. At I ordered a breakfast burrito which was served covered in peppers. When I ordered they asked, “Do you want red, green or Christmas?” I opted for Christmas which is a mix of both types. Tis the season and all that jazz.

Since it was nearing the actual Christmas and not just the fun name for a chile mix, the town square was being decorated with red hatch chile ristras. I told you! The chiles were EVERYWHERE.

Waiting for my walking tour to start and found a cozy nook in front of a fabulous fireplace at the La Fonda Hotel which was designed and decorated by the architect Mary Colter.

Have you heard of her? I hadn’t. But the tour guide mentioned her and another tourist asked something about The Harvey Girls and The Fred Harvey Company. They all seemed to know what that meant but I wasn’t in on it. The tour guide noted how it was usual for a woman to be an architect –there was no law against it, it was just something women did not do. So Colter got her start by working as an interior designer. When the guide discovered I’d be headed to the Grand Canyon, she said I’d learn lots more about her there as she designed and/or decorated many or most (all?) of the original structures including The Phantom Ranch at the bottom of the canyon.

Her work as an architect and designer was highly influential — her style of “parkitecture” became known as National Park Service Rustic—  and yet I’d never heard of her! How is that?! Everyone has heard of Frank Lloyd Wright and yet Colter is arguably more influential than he was. The fu*king patriarchy, man.

Anyway, back to Santa Fe. Get a load of this…I mean, seriously! How can you *not* love Santa Fe?!