I made some pitstops along the way at a Native American pueblo Acoma Sky City, drove through the Petrified Forest and spent an afternoon in Jerome, AZ. A town where I would love to own a shop. So full of character and history. I got a cool kaleidoscope to keep as a reminder even though it wasn’t actually made in Jerome.

I had hoped to go on a hot air balloon ride during the sunrise in Sedona but they called the morning of (5:30am) and said there wasn’t enough wind. Bummer. So I went on a hike instead and lo and behold, what do I see in the distance? Balloon after balloon launching. I was so fu*king pissed and disappointed. The company said that those balloons were w/ a different company and that, although they launched, they almost immediately drifted into the side of a mountain and stayed stuck there for 45 mins. So, yay? It was still a bummer.

On the way out of Sedona on the drive to the Canyon, I stopped at Lowell Observatory in Flagstaff hoping to do a night tour / star gaze / telescope look-through. Their telescope discovered Pluto!  I got there at 4:30 only to find out it closed at 5pm on Sundays while there is still daylight out and, therefore nothing to see. Again, I was so upset and disappointed. I felt like Clark Griswold from National Lampoon’s Vacation. I just needed to scream and cry and punch a cartoon mascot in the face.

The Grand Canyon made up for all that and then some. The Canyon went above and beyond in making sure I was rewarded and paid back for my bad luck in Sedona. I planned to hike but hiking to the bottom of the Canyon and back up on the same day isn’t advisable. It’s highly recommended that if you hike to the bottom, you have a plan to stay overnight. To do that, you have to have a camping permit and, well, camping gear (tent, etc.). I certainly don’t have that stuff and wouldn’t get it for just one night as a solo traveler. There is also a set of cabins / dorms at the bottom called Phantom Ranch. It’s booked so far in advance and so popular that the only way to secure a spot in a dorm or cabin is to enter a lottery 15 months in advance (they’re taking lottery entries for Feb 2020 right now).

My friend Robin had joined me part way thru my trip and she & I talked with a park ranger named Ron Brown at the visitor center to get his advice on what to do/see in two or three days. He mentioned taking a mule ride. I said how I’d heard mixed reviews from other customers so decided against it. He said, “Doesn’t matter anyway, because the mules are sick with a respiratory infection…but, hey, you know what that means? It means you could probably get a last minute spot at the Phantom Ranch.”

Since people who either can’t or don’t want to walk down to the bottom and hike up again, getting down by mule is the only way. So, if you were planning on going down by mule to stay at the Ranch you’re S.O.L. Lo and behold they only had two slots left and they were both in the female dorms. !!! Robin and I high-fived and made our reservation and headed back to tell Ron the good news and thank him for the tip. He was so thrilled he loaned us his walking sticks saying, “I’ve been loaning these out for 15 years and they always come back to me.” NOTE TO SELF: DO NOT BE THE PERSON TO LOSE RON’S STICKS!

We had even better luck the next morning when we checked with the Phantom Ranch people stationed at The El Tovar Hotel. We found out they could upgrade us to a private cabin. A private. Cabin. At the bottom of the canyon! WHAT?!

We had the best breakfast in the fancy El Tovar dining room where I fell in love with the artwork and Mimbreño china then hopped the shuttle to the South Kaibab Trailhead to begin our descent. 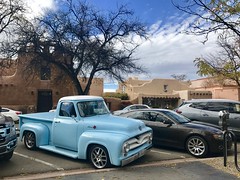