Before I went to bed last night, I considered what I might do today. I thought of starting yoga or meditation, saying to Christian, “I need to clear my mind. I need an open heart and eyes to feel and see.”

I privately, sheepishly declared to myself, “What is right for me? What should I be doing? I need a sign from above!”

I woke to a peaceful, breezy cool day at the Rock House. I spent much of the day researching a new hobby and helping Christian chainsaw some trees. My only “chores” were to drop Christian off at the bus station and pick up a few things at the market. After I returned home, I was on the patio putting my seedlings to bed for the night. That’s when I heard a commotion in the woods behind the outbuilding. I quickly made sure the dogs were secure then wandered to where the sound was. It had been a heavy thump with some thrashing about of leaves followed by silence. If it were deer, I would have seen and/or heard them run away. That’s when I noticed five very large birds circling very low by our outbuilding. 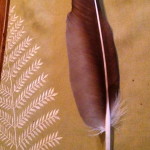 One or more must’ve attacked something. I was so glad I had made Paquita take cover. I’d read just yesterday about how Bald Eagles, which can be spotted all over these parts, can carry about 4 pounds. That doesn’t mean they wouldn’t try to lift her up and drop her from a height that could kill her. As I marveled at their cunning hunting skills and how low they were flying, this feather floated down to earth.

I did ask for a sign from above. Ask and you shall receive, regardless if you like the answer.

The calamus, the hollow shaft of the feather that attaches it to the bird’s skin*, was still wet with a little bit of flesh around it as though it had been ripped out from the bird’s body. Creepy! Weird! COOL!

It measures at 18 inches long (!!!) and is almost perfect except for a teensy, weensy missing nick at the top. As much as I love my little parakeet Dinah, her feathers aren’t nearly this fascinating. The dogs sniffed at it for a full five minutes, but if it moved, they jumped back as if they’d touched an electric wire.

I never did meditate today. As for tomorrow? Tomorrow I’ll wash the dishes and craft a quill pen out of my feather.

~Kambri
*Yes, I did look that up and will quiz you on it later.