The first time I saw the Oscar-winning movie Midnight Express was the summer I turned seven years old. The Academy Award-winning film was based on the memoir by a young American named Billy Hayes who was arrested in Turkey in 1970 during an attempt to smuggle hashish out of the country by taping it all over his body. His sentence of four years was, for various reasons, converted to a minimum of thirty years to life. For trying to smuggle pot. Crazy.

Obviously, it was highly inappropriate for me to watch it. Yet I did…alone…dozens of times thanks to a summer spent at my deaf grandparents who had cable TV. This should serve as a testament to powerful storytelling that a seven-year-old kid would watch a long, quietly intense drama about a Turkish prison experience. 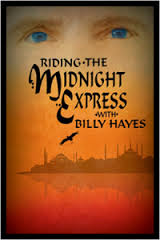 Last week, I went to see Mr. Hayes in his solo show “Riding the Midnight Express”. It’s just him and a stool and a bottle of Poland Spring followed by a Q&A and book signing. He was generous of his time and gave us his all even though it was a light crowd on a Wednesday afternoon during  a snowstorm.

He told the same story he wrote in his memoir — the memoir that Oliver Stone turned into a movie that won an Oscar. After winning, I’m sure plenty would think, “Hang up the hat, dude. You did it!”. Now, 40+ years later, Mr. Hayes is touring the world with a solo show.

This is encouraging to me as someone who is worried that I’ve squeezed all the juice from the lemons life gave me.

My memoir is almost two years old and even older to NYC alt comedy and storytelling audiences. Now, here I am on a train to Rochester to give a speech at RIT/NTID and am in the early stages of producing a solo show of me telling the same old story. Really? YUP!

So the timing of seeing Mr. Hayes could not have been more perfect. There are billions of people in the world and all but several thousand of them have never heard of me, my book, my storytelling, nothing. Add to that, that I actually have a *message* of hope and societal change to share, why would I stop now?

I’m reminded of Mike Birbiglia, too. I saw him tell him tell his Sleepwalk with Me story many times as a long stand up comedy bit about ten years ago, give or take. It progressed to long form storytelling on This American Life and, most recently, a feature film.

Like Mike, I have other stories to share and hope to not be telling the same story in 40 years, but even if I am? Fantastic. What a privilege it is to have people come out, spend their hard earned money and precious time to see me. Thank you, each and every one of you, who have given me that honor.