As I watched live coverage of the NYC Marathon two years ago, the announcer said, “Now the marathoners are entering the less than picturesque part of Queens.” That’s where I live.

There is zero in the way of outdoor park space except for a tiny playground that is across the street from a strip club.

Yes. The only playground is across the street from a strip club. 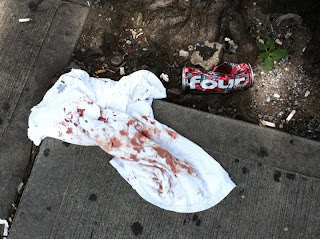 Most mornings the playground looks post-apocalyptic as if zombies had raided Queens and I survived till morning to witness the carnage. Garbage cans overflow and needles, used condoms, beer and liquor bottles, and broken glass litter the ground. Just this morning, Christian took this photo of a bloody t-shirt next to an empty Four Loko can.

For a year, the door man at the strip club Riviera barked me to come in. Never mind that I would  have a dog in tow or would be carrying groceries or wearing gym clothes.

“Why would he think I’d want to go in there?” I would wonder even as I wore the lesbian uniform of jeans, Chuck Taylors and a softball t-shirt.

Finally, he said something that made me reconsider: “Ladies drink for free!”

Whoa. Beep, beep, beep! Back the truck up.

“Free? I’ll be here Tuesday. What time do you open?”

Prepare to lose your rent money Mr. Jiggle Joint Owner because my pal Jenn & I will clean out your stash of white wine!

I imagined the bar manager taking inventory Wednesday morning and firing a cocktail waitress for swiping bottles of Pinot Grigio. Because, really, how would they go through so much so quickly? Men in strip clubs aren’t exactly heavy imbibers of crisp white wine. I, however, am.

Without consulting with each other, Jenn and I both wore summery dresses and had on makeup. Something about being around naked women made us want to look our best. We arrived so early there were only two other men there wearing suits and seated at the ring of seats around the stage.

The doorman escorted us to a table of our choice, away from the stage. We didn’t want to take a seat from a legitimate customer looking for thrills. He also introduced himself to me officially. His name is Abdelaziz Essafoui and he is a Greco Roman Wrestler who competed in the 1996 Olympics for Morocco. In addition to serving as security for the strip club, he competes in cage matches in the Bronx.

We pulled out our notebooks and had a great time brainstorming, catching up on gossip and, of course, drinking free wine. As we were new customers, a dancer was sent to the stage and took off her clothes. It was like Jenn and I were hanging out in the locker room at the gym with one of those particularly extroverted women who stands around with her top off for a long time for no real reason except to show off and/or make me uncomfortable.

Soon, two casually dress guys in their late twenties came in and took the table next to me and Jenn. Again, a dancer was sent to the stage to welcome their arrival. According to the emcee who sounded like a morning radio DJ, her name was Licorice. She was wearing a one piece, stretchy bodysuit which, to me, seemed like an odd choice. If I were a stripper, I’d want more pieces to take off as part of the tease, but what do I know? I put on pants on after I put on shoes. But in one simple move, she was butt naked save for a sliver of string that covered her hee hoo.

A few more gentlemen came in while Licorice was finishing up her song and the DJ called for Candy to take over. (Hmm…theme night?) The song ended but Candy was no where to be found.

“Candy, make your way to the stage,” the DJ bellowed. “Gentlemen be ready for some delicious Candy.”

Licorice looked positively bored, maybe even irritated that she was still on stage without anyone paying her any mind, and moved with the least possible effort required to simulate writhing. The emcee beckoned again, “Candy, has anybody seen Candy?” Still no Candy.

Licorice had had enough. She picked up her body suit and began to get dressed.

Now, ladies and gents, seeing someone take off clothes might be titillating, but watching someone get dressed is not. In fact, it is an unequivocal turn off. Especially in something like a one-piece stretchy bodysuit. Licorice didn’t care.

Picture a woman trying to put on a too-small pair of Spanx. She wriggled and squeezed and clenched and thrust her body to squeeze into her outfit all while teetering on 6-inch platform heels. This should be an act on “America’s Got Talent.” It takes SKILL, people.

As we watched the spectacle unfold, Jenn curled her upper lip like she’d just smelled someone fart after eating nothing but sauerkraut for a week. “She really should do that elsewhere.”

Finally Candy appeared, as did a large group of men. The music got louder, the lights dimmer and strippers took men to back rooms. The shift in mood was palpable. It was like hungry lions lounging lazily in the sun were suddenly tossed a lone, bloody carcass. And Jenn and I were like caribou whose fellow herd mate got caught and ripped to pieces. Do you stay behind to try to save them and witness the slaughter? Absolutely the fuck not. So we asked for our check.

Turns out Mr. Olympic Greco Roman Wrestler Turned Doorman at a Strip Club and Cage Match Fighter lied. Ladies don’t drink free. He only bought us our first round. Shocker! And, how could we argue? Present the contract?

Luckily the wine was priced at typical NYC prices and not the jacked up rate strip clubs often charge. To split the bill, Jenn needed to break a $20. Because the place had gotten so busy with men dropping loads of cash, we were not high priority for the staff. Jenn grabbed the first available stripper, handed her the bill and asked, “Can I get change for a twenty?”

When a barmaid came by Jenn asked, “I gave that stripper $20 and…” I waved frantically and mouthed, “Don’t call them strippers.”

“Oh, excuse me,” Jenn continued, rolling her eyes. “I gave that ‘exotic dancer’ $20 for change and she never came back with it.”

The last time I had been to a strip club was with a famous billionaire. Let us just say, we were treated differently that night. Jenn never recovered her missing $20 which made me feel terrible. The main reason I invited her was for the free drinks and to save her money. Abdelaziz* was conveniently missing in action.

Now, when I need my thrills, I go to the playground.

—Kambri
*When an Olympian says free drinks, one expects free drinks. I mean, isn’t there some Olympiad code of ethics?