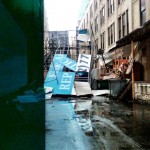 I’m a big fan of thinking globally, acting locally but, day-ummm, this is a bit too local! When Hurricane Sandy hit, I was on my book tour in Texas and Christian was stuck in West Palm Beach where he’d headlined the Improv. While we were safe, our dogs were still in harm’s way. They were boarding at Camp Bow Wow in Long Island City. As you can see from Google Maps, they’re just steps away from water that leads from the East River. The kennel owner, Steve, stayed overnight with the dogs and had an evacuation plan that involved moving all the dogs to the 6th Floor. Luckily, he never had to implement the plan as water never flooded the building. There was lots of debris, a broken window and the billboard that used to be on the roof is now in the alley.

Christian finally made it home Thursday after the hurricane, flying to Atlanta to Scranton where he rented a car and drove to our Rock House to check on it and get a few hours of rest. Thankfully house was fine save for some downed trees and branches. He drove back to Queens and picked up our beloved “babies”. I flew home Friday after a whirlwind, exhausting two plus weeks. But I couldn’t rest knowing my city was in pain. 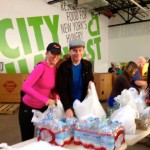 Rather than move hell or high water (or waste precious gas) to get to Staten Island or the Rockaways, Christian and I responded to an urgent request for volunteers  in our own neighborhood at the City Harvest headquarters at the Long Island City waterfront Saturday morning. They’ve delivered over 42 MILLION pounds of food to New Yorkers this year alone. They deliver food Every. Single. Day. So, they’re obviously set up to handle an operation like this. Sadly they lost a lot of trucks from water damage (their lot/building is on the same exact trail of water that didn’t hurt Camp Bow Wow), but their operation was still in full swing.

We jogged there at 9:30 AM and joined the assembly line and proceeded to bag food and water. Final count at City Harvest at the end of the day: 64,668 pounds and 5,389 bags of non-perishable food items heading to Red Hook today. 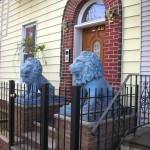 Exhausted, we walked home, and passed a ridiculous set of lions in front of a home (So Queens-y. So klassy!), and another home that had a bench, fake lawn and garden gnomes (one holding a miniature bottle of Smirnoff) inviting anyone to sit on it.

We continued on past 5 Pointz where I snapped pictures of two new pieces that I really liked (see below) and stopped by Coffeed, the new store across the street from our apartment which is on the ground floor of the building that houses the a rooftop farm run by Brooklyn Grange.

I got back to my apartment at 4PM. I’d been back in Queens for less than 24 hours. Working with our neighbors for a good cause then walking home surrounded by the quirkiness and talent and ingenuity that makes NYC so special reminded me that broken or not: 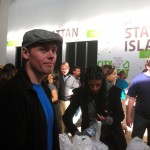 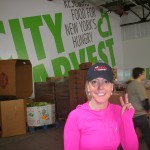 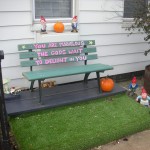 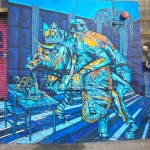 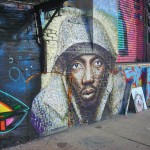 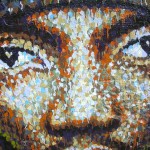