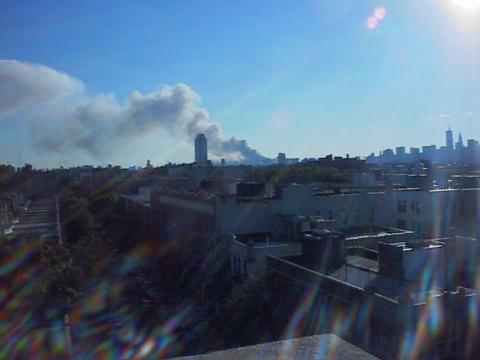 For all these years, I felt my 9/11 experience generally banal, so I haven’t shared it for fear of looking like I’m trying to insert myself into a tragedy. So many who weren’t here have fetishized it already. I’ll skip the details of the morning (it was a beautiful fall day, I was at work, etc.) & the days after…my mom asked me to share about my walk home.

It wasn’t until I saw the movie Dunkirk in 2017 that I realized I had experienced a trauma specific to me (and the thousands of others with me) as we walked home on the 59th Street Bridge. I’m curious to hear if anyone else was “with me” remembers or experienced this. It would have been around 2 or 3PM that day, I’m guessing. Possibly even closer to 4pm as I did journal that the relatively short walk took almost 3 hours

I left Rockefeller Center around 12PM with Jeff, Mitch & Rich, the attorneys with whom I worked. We walked north along 5th Avenue. We made a pit stop for a round of drinks at the Plaza’s iconic Oak Room before we all had to split up and go on our own ways: Jeff & Rich to the UWS, Mitch to the UES and me, alone, but not alone, across the 59th Street Bridge to Queens.

The walk was slow due to the crushing number of people and cars crowded on the bridge. People meandered through cars and hitched rides on the backs of trucks, rode skateboards and rollerblades while hanging on to side mirrors. About half way across the bridge, there was the piercing, shrieking, ear blasting sound of a jet that was very close and moving very fast. There was no where to run, nothing to do. We all collectively sucked in and held our breath and looked toward the sound. Then the sight of jets. Fighter jets. USA jets. Seeing the American flag and recognizing that we weren’t in danger but they were there to help save and protect us, we let out our breath with a collective cheer.

This took place over *maybe* 2.5 seconds. So fast. But seared into my memory.

Fast forward to 2017. I was watching the movie Dunkirk and was bombarded with scene after scene after scene of airplanes targeting and bombing people stuck on bridges and piers. They had nowhere to run. It was familiar. Too familiar. It surprised me how wrecked I was by this movie. I came home and sobbed. Grieved. Released some pent up emotions. I called my mom and told her about how overwhelmed I was by it all. I had no idea how close to the surface that old trauma was.

I avoid 9/11 coverage mostly due to the aforementioned fetishization and more. But also to avoid those feelings.

To be on the island of Manhattan on 9/11 –a city under active attack and you a sitting duck– was traumatizing. The horror and terror when a 2nd plane hit and we knew this was deliberate and think “What do we do now? Where do we go?” was traumatizing. Then the images that followed in real time was traumatizing. But that walk home on the bridge. Those 2.5 seconds contained a whole beginning, middle and end of a war movie with a triumphant end.

Were you on the 59th Street Bridge with me that day? Do you have any memory of this? Please share, if so. It’s one of those nagging memories that I would like to resolve.