I enjoyed my days poolside so much that my feathers were ruffled nary a bit when three of the most obnoxious sounds happened in unison: a motorcycle so loud it set off a car alarm precisely at the moment a baby screamed at being placed in the pool. I remained completely zen-like. I sipped my margarita and merely commented on the timing.

At the airport, all things that could go wrong did: My bag was flagged for security after the x-ray operator enjoyed a big old laugh with the guard as they eyed the contents of my bag. Said guard then manhandled my “back massager.”

“It’s so hot in here,” I complained to Christian as the guard got warmer and warmer to the hidden valuable. Point = +20 to Murphy’s Law.

After that little incident was over, we got caught behind the entire Ecuadorian Little League Baseball team. “I’m glad I’m not going to Ecuador on their plane; it’s practically doomed to crash.” Turns out they were going to NYC. Yep, you guessed it, on our plane. Point = +50 for me for kicking fate in the balls and saying “fuck with me”.

After eyeing the 50-plus identically dressed little boys and men all chatting excitedly in Spanish, I glanced back at Christian. The exasperated look on his face that said, “This flight is going to suck royal ass,” was priceless. Point = +30 to the boys for proving us wrong. 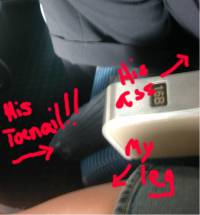 Turns out, the boys were very well behaved, unlike the Hassidic father who sat to my right and his three boys and wife sat in the aisle across from us. The man smacked gum in my ear the whole way. He literally leaned over (to look out the window) and would smack, smack, smack without regard. He took his shoes off and hiked his leg up on the seat so I got a real close glimpse of the shine on his toenails peeking through his worn black cotton socks. Who puts their feet up on a chair when smushed that close to a total stranger? Point = -100 to Miss Manners…that bitch didn’t teach him shit.

At one point I looked over at one of the dad’s boys just in time to see the large contents of his tiny mouth getting sloshed around wildly. Apparently he learned his chewing habits from his dad. Later the father scolded the same youngster for staring and pointing. Point = +5 to Dad for attempting some sort of guidance.

Looks like I win with 50 points. Woo! Here’s my prize, a picture of me & David Alan Grier in the Improv green room. 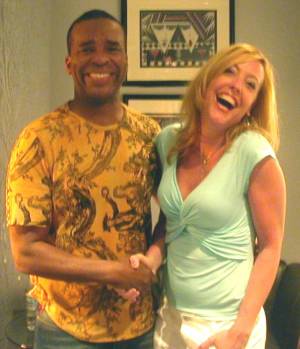