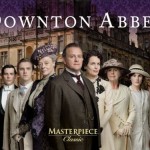 It’s like 2013 wants to make sure I keep pinching myself (or perhaps I’ve developed a disorder like trichotillomania or something) but this most lovely, fun, varied week will be capped off by the debut of Season three of Downton Abbey tonight at 9PM EST. (Search for “Masterpiece Classic” on your DVR rather than “Downton Abbey” if you want to tape it. Wish someone had told me that after very frustrating, confused searches over an entire week, so you’re welcome!)

New York Magazine outdid itself with an episode-by-episode breakdown of the past two seasons and major plot points for each character. I told my protégé Jeaniah that I was looking forward to the show tonight, and that I wasn’t sure she’d like it but that I love it. “It’s set in 1910s and ’20s in this big, beautiful mansion and all the ladies wear gorgeous dresses and jewelry and they all talk in British accents and…”

“And sip tea like this?” Jeaniah asked as she curtsied with an imaginary teacup with her pinky finger sticking up and a pompous look on her face.

Lest you think I’m all high falutin’, tonight I’m equally excited for the return of The Biggest Loser (or, as Christian calls it, “The Fattest Fatty”) and Jillian, one of the original and best trainers. I’ve cried during the opening sequence. Love seeing people work hard, tackle their demons and achieve goals. The show is at its worst when it lets it get too “reality TV” when contestants get hateful and let the color of money cloud their vision. Jillian keeps it real.

~Kambri
I’m sure Mob Wives would be more “yang” to the “yin” of Downton Abbey but my stomach churned at seeing a 10-second promo for it. That’s the best 10 seconds they’ve got? Shee-it, I can see that from my fire escape around 4:15 AM every Sunday morning when the Latin nightclub downstairs stops serving. You can do better, Tee Vee Producer. Tsk! Tsk!