With all the talk of cicadas coming out of a seventeen year slumber emerging from the earth, I can’t help but think of my maternal deaf grandmother. She was traumatized at the mere sight of their crusty brown exoskeletons, so surely the onslaught of trillions must have her convulsing in her grave.

During my childhood, I spent summers staying with her and Grandpa at their two-bedroom Tulsa home. Once the magic of cable television wore off, I staved off boredom by playing pranks on my sweet, gullible, good sport, grandma. My budding acting skills were honed as I terrorized her. I would ring the doorbell and pretend an axe murderer was trying to break in and the phone lines had been cut, or I’d push over the swing set in the backyard and act as if my cousins or the neighborhood kids were trapped underneath with broken limbs.

My favorite prank was finding the empty shells of locusts clinging to trees and bushes and place them where I knew Grandma would grab before looking:  The kitchen faucet, the television remote and the steering wheel of her car. The jerk of her hand as if she’d touched a hot stove coupled with a blood curdling scream was pee-in-my-pants hilarious. The meanest placement was on the toilet paper roll knowing she would have no choice but to either not wipe or gather the courage to remove the critter on her own. Bless her sweet heart. 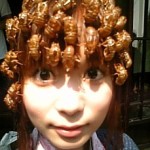 I never thought to do this.