By now I’m sure you’ve seen the news from Cleveland, Ohio that three young women Gina DeJesus, Amanda Berry and Michelle Knight who were missing for nine, ten and eleven years respectively, have been found alive. 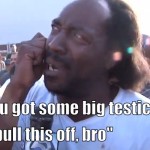 During an epic interview with local news reporters, neighbor Charles Ramsey had this to say about his kidnapping neighbor Ariel Castro, “You got some big testicles to pull this off, bro.”

“I knew something was wrong when a little, pretty white girl ran into a black man’s arms” is just one of several amazing quotes Ramsey gives. The interview came after he came to the aide of Berry who bravely initiated the escape from captivity with her six-year-old daughter at her side. (Yeah, do the math, that daughter is the product of her captor or one of his two brothers who are also in custody.)

“I figured it was a domestic-violence dispute,” Ramsey said. And he helped anyway.

Now that is a motherfu*king hero right there. Thank God he didn’t just look away when he thought it was a domestic situation like so many people do. Bro should get some hefty reward money to buy some of those newfangled wraps from Mickey Ds!

I had screamed and begged for someone to call 911 the night Dad attacked Mom. No one did. Yet within the week we were evicted for “excessive noise disturbance.” So my neighbors DID hear my cries and chose not to intervene. They didn’t even place an anonymous call to 911. I wrote about it in my memoir (excerpt below) and to this day my heart races and blood pressure rises when I think about the cowardice and selfishness they displayed.

If you hear or suspect any abuse of any kind, you can anonymously report it. SIMPLY REPORT IT. Charles Ramsey? He ran to the porch, smashed the door, pulled the woman and her child out and called 911. To him I’ll echo his own words:

“You got some big testicles to pull this off, bro.”

Excerpt from BURN DOWN THE GROUND Chapter 14 – Excessive Noise Disturbance:

I was back with Rob for only a week when Mom dropped another bombshell: “We’re going to be evicted.”

“Excessive noise disturbance. Come on and help me pack.”

My blood boiled. I had screamed and begged for help the night my father smashed our porch light, punched holes in the walls, and broke down our front door. Not only had the neighbors heard my cries for help and chosen to ignore me, but they had complained?

Defeated, I packed up my room for another move. I was loading up boxes of books and letters when I came across a pile of college brochures and scholarship applications. Before August 15, I had planned on attending a university to major in aeronautical engineering as homage to Mom, admiring her for her work with helicopters. Aeronautical engineering could be my backup plan in case my acting career didn’t pan out. The paperwork had been overwhelming and asked detailed questions that I didn’t know how to answer, like what my parents’ income was. On the rare occasions Mom inquired about the process, I brushed her off. She never went to college, so she wouldn’t know how to fi ll out the forms any more than I would. “I’m working on them,” I answered and that was that. They remained incomplete.

Who am I kidding? I angrily hurled the blank applications in the trash and emptied the rest of my room. I felt hopeless and just gave up. I should have asked for help, but I didn’t know how.