Day two of our “vacation in our own city” was on Sunday, September 4th. We called a livery cab to drive us to Hunter’s Point in Queens to hop on the NY Water Taxi. First off, we almost never hopped on the taxi because of this gloriously cheesey, man-made beach that was nestled in the midst of rocky construction and ugly coastline and offering $2 PBR, hot dogs and classic rock blaring over the speakers: 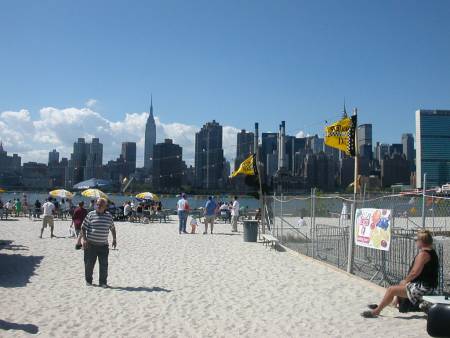 Strange twist of fate / timing / whatever, unbenownst to me at the time I snapped the photo, my friends Rachel & Chuck are directly under the yellow flag in the picture below. I discovered them later as we sat atop the ferry (dock entrance pictured on the left) and waited to depart. 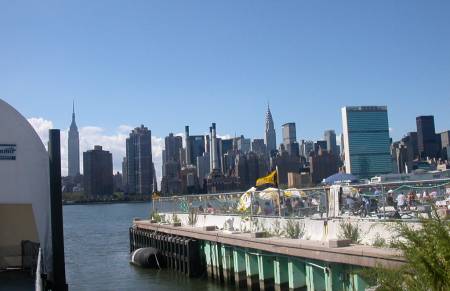 We smuggled Paquita on board and made her stay in her bag the whole time from Hunter’s Point to Manhattan’s East Side, down around the south tip stopping in Brooklyn, passing the Statue of Liberty, Wall Street & then on to Pier 63 on Manhattan’s West Side. Well worth the $10 on such a beautiful and uneventful day. But Paquita wasn’t too happy: 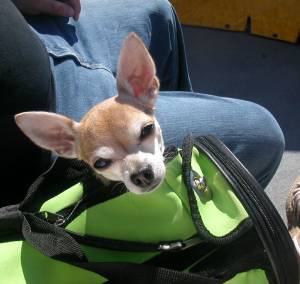 After a very long leisurely al fresca lunch at the sports complex of all sports complexes Chelsea Piers, we walked to Sin Sin for Rob P’s show The Pro Shop. Paquita was a peach and just chilled sipping water and “digging” herself a bed on a cushioned bench.

Overall, not a true vacation since Christian did a spot on Rob’s show and we’ve been to Chelsea Piers before and the Sin Sin lounge, but the Water Taxi was so worth it as was getting Paquita out of the house to blow some serious stink off.

—Kambri
Her head still smells like an egg roll, though.