Me being all director-y on set yesterday. The shoot went according to Hoyle and we were out in time to get in three full games at Bowlmor (I beat Christian two out of three!) before heading to the final performances Moonwork.

After all that activity, my back is killing me today. Ugh. I’m performing tonight, Tuesday, Wednesday AND Thursday. Goodness me, I’m beat.

In sadder news, I think Larry is on his last leg. Literally. He’s been sleeping all day and keeps his right leg up almost the entire time. The vet said it’s very likely he has a tumor near or on his testicles which is why he would lift the one leg. It’s common in parakeets, and at his age of eig 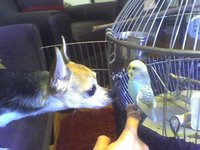 ht years, I’ve had him longer than most live in captivity. Time will tell, I suppose, but if he is dying soon, I want his last days to be good ones. I’ve moved Dinah into her own cage (she was being very aggressive toward him lately) and have given him millet and fruit to try to help fatten him up. He’s a little on the skinny side and hasn’t been chirping, doing his catcalls or barking at Paquita. Poor Larry. Get well soon, little boy.