Last night I attended a screening of Fatal Attraction at the Museum of the Moving Image. It was being shown in conjunction with Independent Film Week in collaboration with the Independent Feature Project.

I left my apartment at 7:25, bought two packs of plain M&Ms, walked to the museum, picked up my ticket & program, purchased a bottled water and was seated by 7:38. I can’t believe I live so close to this awesomeness!

After the film, Glenn Close sat down for a Q&A session. She is elegant and slight in build and has an amazing resonant voice. The man leading the Q&A wasn’t the best at interviewing (he rambled a bit and his questions were phrased more like statements), but the audience had great questions which she took time answering very thoroughly with much thought given to the query.

Afterwards, wine and snacks were served upstairs in the museum gallery which had on display this dress worn by Ms. Close in Dangerous Liaisons. The museum had just put it out hours before the screening and we were the first to view it. Nice. 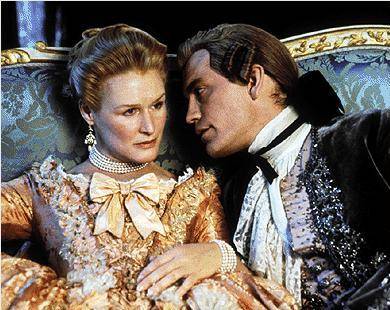 I wandered around with my white wine expecting someone to scold me for having a drink in the gallery. But, no. We, the elite who attend special film screenings with movie stars, are civilized and they expect us to behave as such . . . in Queens.

—Kambri
Such an oxymoron.