My usual dry cleaners is closed for vacation, so I called Christian for another suggestion. That was silly. There are like 1,063 in a two block radius. I found a very clean, new-looking French cleaners directly across from Key Food. I dropped off two sweaters and two shirts and figured I’d stop in Key Food for a few items. Thirty minutes and $45 later, I had bags filled with groceries that I think I might actually eat before they rot. Never mind that they’re mostly non-perishables. 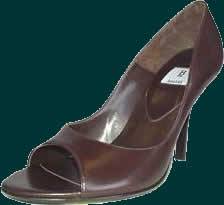 I left two pairs of the daintiest girly shoes with the oldest, gruffest man who will have them ready for me later today for only $10. Normally I would just throw out shoes thinking they aren’t worth the hassle, but I had barely worn these shoes when the little heels wore through from walking on the sidewalks of New York. One pair was worn much before its time because I walked home in them during the blackout. These tiny little stilletos weren’t meant to trudge across a bridge!

I’m so proud of my diligence and responsibility today – dry cleaning, grocery shopping, shoe repairs, vacuuming, and organizing – you’d think Martha Stewart laid eggs in my ear while I was sleeping. Could that be why it hurts? Hmm . . . I think I want to check my stock prices.

Okay, enough. I have more “things” to do. I like doing “things”.